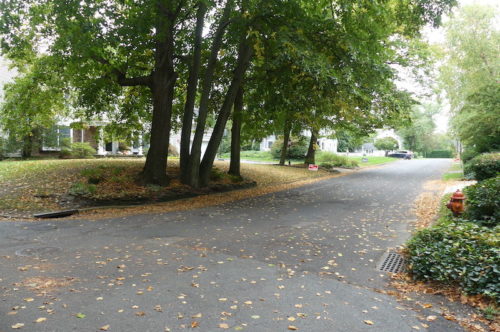 Cooney Terrace, above, and part of Hance Road would remain sidewalk-free, and possibly curb-free, under a proposal up for a vote Monday night. (Photo by John T. Ward. Click to enlarge.)

A Fair Haven road project that appeared dead Tuesday may have been revived by the man who was named mayor that night.

Mayor Joshua Halpern on Friday called a special meeting of the council for Monday night to consider a plan to repave the northern end of Hance Road – but without sidewalks and maybe without curbs. 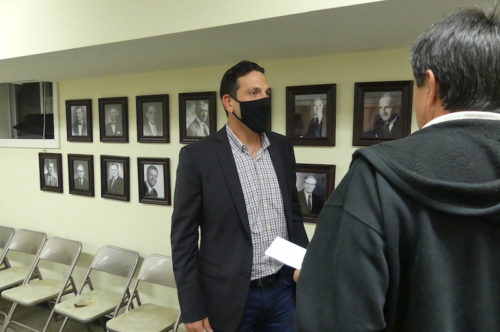 The meeting’s sole purpose is to authorize borough administrator and borough engineer to solicit bids for improvements to Hance Road and Cooney Terrace, according to the posted agenda.

But the bid specs won’t include sidewalks, either as part of the “base” project – road milling and paving – or as an option; and contractors will be asked to price curbs only an an option, the resolution states.

On Tuesday, by a 3-3 vote, the council appeared to kill plans required to obtain a $350,000 grant from the New Jersey Department of Transportation after strong pushback from neighbors, who said they preferred to keep their “country lane” as-is, sans curbs and sidewalks.

Late Friday, it wasn’t immediately clear if passage of the proposed resolution would enable the borough to salvage the grant. On Wednesday, Administrator Theresa Casagrande told redbankgreen that the council’s action of the night before, if it stood, would preclude the borough from capturing the grant.

In addition, borough Engineer Rich Gardella told the council Tuesday that he could not redesign the project without curbs and sidewalks in time to meet the state’s November 21 deadline for securing the grant. He also said that, as a professional engineer, he would not certify such plans.

Casagrande told redbankgreen that “Mayor Halpern” had called the special meeting under his authority in section 2-1.2-g of the borough administrative code, which gives the mayor the power to call such sessions “when necessary.”

At its meeting Tuesday, the council unanimously approved Halpern, a political newcomer, from three nominees forwarded by the local Republican committee to complete the remaining 14-months in the term of Ben Lucarelli, who resigned as mayor September 14.

As of Friday afternoon, however, redbankgreen was unable to determine if Halpern has been sworn as mayor, and if not, the basis of his authority to act in that capacity.

The fact that Halpern was not immediately sworn to office Tuesday prevented him from casting tiebreaker votes that night.

Monday’s session will be held via Zoom at 6 p.m.