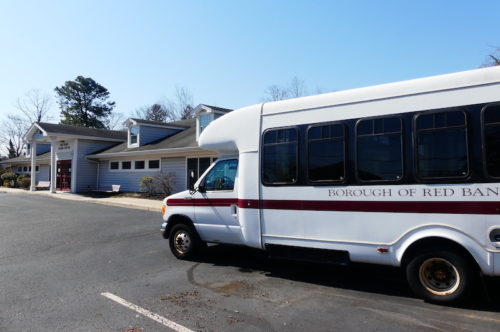 The Senior Center has been idle since a fire suppression system leak in January, 2019. (Photo by John T. Ward. Click to enlarge)

Six months after the Red Bank council agreed to repair the water-damaged Senior Center, a presentation – or two – is in the works to get public input on the plans.

At its monthly workshop session Wednesday night, with three members absent, the council tentatively agreed to schedule a session or two on October 27.

The idea is to give residents “an opportunity to comment on the plans, the reviews, make suggestions, recommendations, additions, retractions,” said Mayor Pasquale Menna. The architect would be available to answer questions, he said.

A final decision on the date will require a majority vote at the governing body’s next session, on October 20, to cancel its own October 27 meeting.

The October 20 session is itself a rescheduling of the previously planned October 13 meeting.

Borough Clerk Pam Borghi said she will individually poll the members who were absent Wednesday – Michael Ballard, Hazim Yassin and Erik Yngstrom – for assent. Waiting until October 20 for direction would not leave enough time for planning and public notice, she said.

Menna said the session or sessions should be held in-person at “one of the schools or borough hall, whatever is appropriate in terms of socially distancing.”

The center, on Shrewsbury Avenue, has been closed since a January, 2019 leak of the fire suppression system. Since the easing of pandemic restrictions, seniors have gathered in temporary facilities at Trinity Church on West Front Street, where the borough has leased space.

In April, after months of bitter debate about the role of the Redevelopment Agency in determining the center’s fate, the council voted 6-0 to authorize preparatory design and financing of restoration work.

At the time, and repeatedly since then, a number of residents have challenged the scope of the planned work, demanding to have a say before a construction contract is awarded.

At the April authorization, then-Business Administrator Ziad Shehady told the council that the process of awarding the contract could take until November, with another five months to complete construction. The Redevelopment Agency estimated the project would cost $1.6 million.