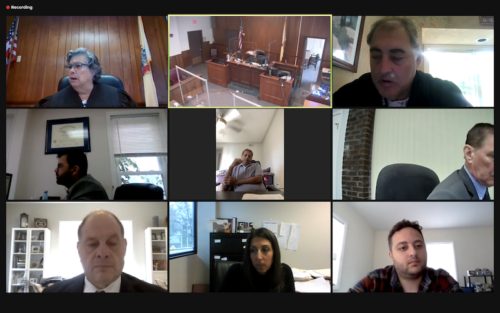 Lame duck Councilman Hazim Yassin dodged possible eviction from his Red Bank apartment with an agreement to pay his landlord more than $32,000 in back rent Friday.

As previously reported by redbankgreen, Molly Pitcher Apartments alleged in Monmouth County Superior Court that Yassin had not paid rent on his Branch Avenue unit since January, 2020.

By August of this year, the debt had grown to more than $29,000, the landlord claimed.

The matter was scheduled for trial Friday if last-minute talks did not yield a settlement. After an arbitration session, Yassin, who represented himself in the hearing conducted via Zoom, told Judge Kerry Higgins that he agreed to the terms of a negotiated deal.

Under the settlement, in addition to his regular monthly rent of $1,540, Yassin will pay $2,788.65 per month from December 1 through next July to cover unpaid back rent totaling $32,309.20, “which the tenant admits is now due and owning,” Higgins said.

“The parties understand that a warrant of removal, however, will not be issued, and an eviction will not take place at this time,” said Higgins. But if Yassin breaches the agreement, the landlord may initiate eviction proceedings, she said.

Afterward, Yassin told redbankgreen via text: “As I stated last time, this was a private legal dispute that was held up in the courts and delayed due to the pandemic. I’m glad we were able to reach a compromise with a settlement that both sides are happy with.”

Following redbankgreen‘s initial article on the case in September, Yassin said he and the landlord were “in a dispute and it is working its way through the process of the courts.” Court records, however, show no submissions at all by Yassin, and no references by the landlord to a dispute.

Yassin, a Democrat who this year holds the ceremonial title of council president, leased the apartment, his first residence in the borough, in September, 2017, just 14 months before he was elected to the council.

He lost his bid for a second term when political newcomer Jacqueline Sturdivant outpolled him in the June Democratic primary. His term ends December 31.