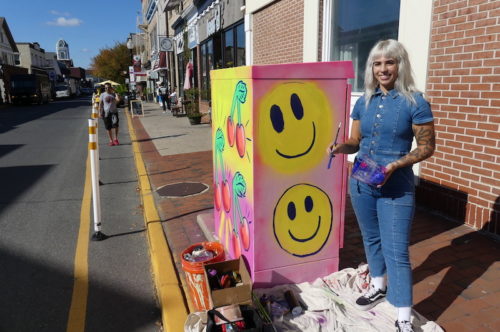 A utility box at the corner of Monmouth and Broad streets in Red Bank is popping with bright colors and images these days, courtesy of a borough artist. 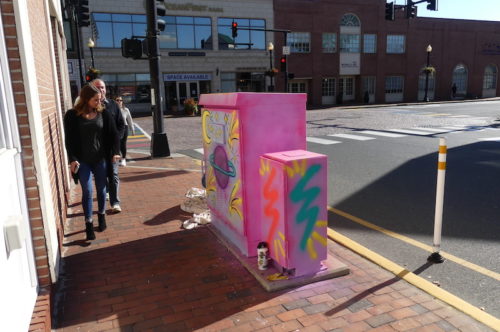 Her project: sprucing up a cabinet that contains the controls for the traffic light at the intersection. For years, it sported images of a coffee cup, a spoon and a frog, but those had faded and been covered over with wads of chewing gum and stains from beverages left on top, Ybarra said.

“I just wanted to make something that was positive and colorful, and that was as personal to me as possible,” she told redbankgreen on October 22, as she neared completion of the project. “I use a lot of simple iconography in my work, like Saturn and smiley faces and cherries and Sailor Jerry tattoos, because I think it’s relatable to everyone.”

Richard Ybarra, the artist’s father, was on-scene as Bella wrapped up the project. He told redbankgreen that young children have been staring wide-eyed at the work, sometimes begging their parents to take them closer.