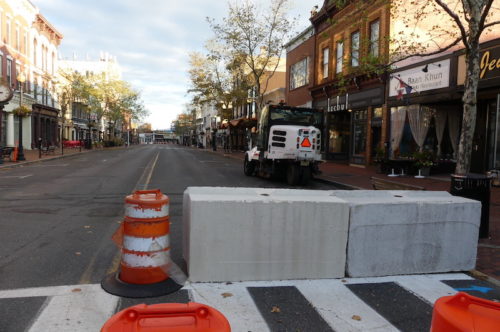 A street sweeper sat ready for use behind barriers that remained at Broad and White streets early Monday. (Photo by John T. Ward. Click to enlarge.)

Red Bank’s Broadwalk dining promenade wrapped up its second season with the reopening of upper Broad Street to traffic Monday.

But downtown motorists will face a new set of obstacles as the borough embarks next week on a road project that’s expected to continue until Christmas.

Here’s what to expect, per acting borough administrator and police Chief Darren McConnell. 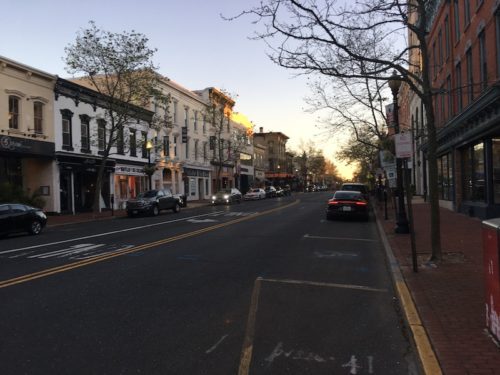 Driving the project is a need to replace the sanitary sewer line, which is undersized relative to the demand, much of it created by restaurants.

By going to a 12-inch main, replacing sections that vary between 8 and 12, the borough hopes to experience “fewer grease-related clogs,” McConnell told redbankgreen last week.

The $2.69 million project also calls for surface improvements between Front Street and Harding Road, including the installation of retractable hydraulic bollards at Broad Street intersections with Front, White and Mechanic streets.

The key-activated devices will enable the town to easily close off the street for future editions of Broadwalk, if any, as well as special events, without having to haul concrete barriers in and out with heavy equipment. The bollards comprise about $100,000 of the expense, consulting engineer Laura Neumann told the council over the summer.

• Work is expected to start November 8 at the north end of Broad, with isolated digging to install insertion valves that will enable water shutoffs as needed. The valves will “aid in localizing any necessary shutdowns of water during the project,” McConnell said.

• Over two or three nights, Broad Street at the intersections of Front and Harding will be closed for the installation of new sewer connectors. Because of Monmouth County restrictions, that work has to be done by December 1, and doing it during the day would adversely impact traffic, McConnell said.

• Starting at Front Street and heading south, crews will then begin several weeks of digging up Broad Street to install the new sanitary sewer line.

Because the sewer is in or near the center of the street, sections of Broad will be closed to traffic in both directions. Weekly alerts and email blasts will go out alerting the community where the closures are planned, McConnell said.

“Minor” disruption, if any, to sidewalk access is expected during this phase, he said.

Businesses “know they’re going to be impacted, but I think they’re satisfied the communication lines have been good so far,” McConnell said. “We’re hoping they see the benefit of this in the end. It’s going to be beautiful and a little safer for pedestrians.

• Property owners, who are responsible for laterals, or lines that tie into the sewer main, have been advised to replace theirs while the trench is open. The contractor, Montana Construction, will only be doing laterals for property owners who request them and pay the necessary fees, McConnell said.

“We also encourage them to replace their water service to the existing main if it is still galvanized pipe, if it is old, or if they are experiencing less than adequate pressure,” McConnell said.

• The Red Bank Catholic/St. James complex  has begun implementing a new traffic circulation plan, asking parents to use Maple Avenue, rather than Broad Street, when dropping off or picking up children to minimize conflicts with the project.

“At some point, Broad Street will be closed” at Peters Place, McConnell said.

“So far, it’s actually been working better” than the two-way arrangement, “so it may be something that sticks even after construction,” he said.

• The goal is to “wrap up before Christmas, because the weather should start to turn negative for us by then,” McConnell said.

A 90-day settlement period will then begin, with the project resuming in the spring. That’s when concrete work for curbs and newly created bump-outs will begin, McConnell said.

• Among the final steps is the installation of the hydraulic bollards, which must be seated four or five feet below the road surface.

“The challenge with them will be what’s underground,” including utilities, old conduit and trolley rails, McConnell said. “There’s a lot under Broad Street. There’s old, abandoned mains, conduit. Most of the trolley tracks have been removed, but every once in a while you come up with a small amount of track” that has to be cut, he said.

• Final paving is expected to occur in April, along with the installation of new benches and plantings.

The existing light poles will remain, but all the heads are being replaced with LED fixtures, McConnell.

Also in the plan: new trash receptacles that compact the trash and “do a better job of containing it, thereby reducing litter in the street,” McConnell said.

• And what about the Holiday Express concert and downtown light-up, scheduled for Friday, November 26, which traditionally brings in several thousand visitors?

“The contractor is aware of the holiday concert, and will be finishing up work early that Wednesday and ensuring that the area is clean and safe for the event on Friday,” McConnell said.