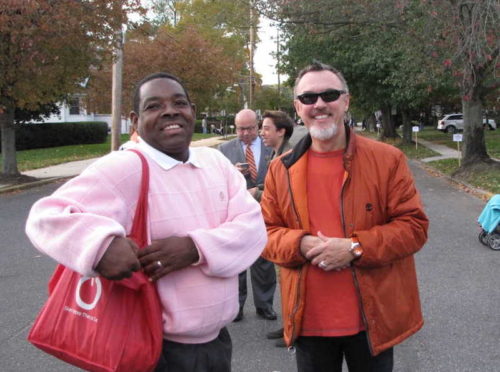 Michael Ballard and Ed Zipprich in 2015; Mayor Pasquale Menna is visible in the background. (Photo by John T. Ward. Click to enlarge.)

The move exposed new depths of a bitter split with 16-year incumbent Mayor Pasquale Menna, who told redbankgreen that party committee members had shown “their true colors” with their decision.

In a prepared statement, Ballard, of East Bergen Place, said he was “deeply honored and humbled to be the choice of our duly-elected Red Bank Democratic County Committee.

“Throughout my life, as a Postal Service Union Rep, as a member of the Board of Education and as a Council person, I have dedicated myself to speaking up for people and bringing their vision forward. I pledge to continue to do all it takes to make our residents feel heard and proud,” the statement said.

Michael Ballard is the choice of the local Party’s 18 person select club for mayor. The result last night was completely expected and not a surprise. The majority of committee members are wholly subservient to the municipal democratic boss.

I went from the vote tally to meet with the Charter Commission to discuss what I hope will be the future of Red Bank.

I will keep my options open [about a potential primary challenge].

Former Councilman DuPont’s best advice to me was that “if you want a friend in politics, go get a dog.” I did that. I kept my faith with members of the committee for decades. I am grateful that I forced them to vote to see their true colors.

Menna, of River Road, grew up in Red Bank after emigrating with his parents from Italy, via Canada. As an attorney in the 1980s, he became active in housing issues before serving 18 years on the borough council. He was elected to succeed Ed McKenna as mayor in 2006.

In recent years, the all-Democratic council has been bitterly divided. Menna has often been at odds with the Zipprich-Ballard faction, which now has a 4-2 majority with the recent additions of Jacqueline Sturdivant (by election) and Angela Mirandi (by appointment to fill a vacancy).

In the minority are councilwomen KathyHorgan and Kate Triggiano, with whom Menna frequently sides.

Seats held by Horgan and Mirandi will be on the November ballot; Mirandi and John Jackson won the local committee’s endorsement Wednesday.

At the Charter Study Commission meeting Wednesday night, Menna said municipal government was no longer working as well as it once did, largely because of “interference” in the daily operations of borough hall by council members he did not name.

He also said the “self-immolation” of the local Republican organization had given the regular Democrats too much latitude, and endorsed a call for nonpartisan elections.

The GOP has failed to field any candidates for council in the last two elections, and Menna ran uncontested for his two most recent wins. [CORRECTION: Republican Pearl Lee ran against Menna in the 2018 general election.]

“You have one party running everything, and you have a chairman who runs that party,” he told the commission.