RED BANK: ‘HISTORIC?’ NO ONE KNOWS WHY 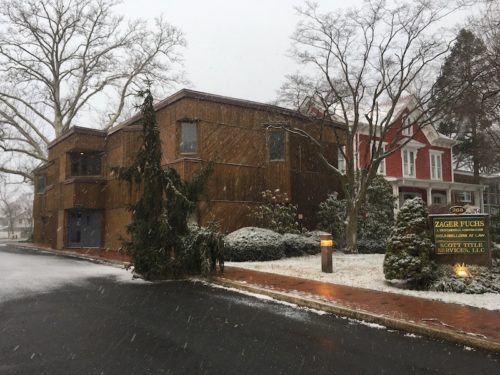 The office building at 268 Broad Street was erected in 1979.

Why was a modern office building that’s not in a historic district required to get Red Bank Historic Preservation Commission approval for planned remodeling work Wednesday night?

The building’s owner didn’t know, and he’s the lawyer for the borough planning board, for which the HPC is an advisory panel.

As previously reported by redbankgreen, the plan for 268 Broad Street called for a new skin to replace the wood sheathing and windows on the austere, boxy structure.

But after a glitch-filled, 20-minute delayed start to the HPC’s monthly meeting via Zoom, it quickly became evident that no one knew why a certificate-of-appropriateness was needed.

Community planning Director Shawna Ebanks said the property was included on an inventory of historic properties created in 2010, though she didn’t know why, and no paperwork explaining the rationale was available.

Michael Leckstein, a 40-year partner in the group that owns, and is now selling, the property, told the HPC he had “no idea” the property was included.

“We were never notified that we were on any list until this just happened,” said Leckstein, who serves as attorney for the planning board.

“There’s nothing historic about it, or interesting or anything else – excuse me,” said HPC member Barbara Boas.

“It’s modern architecture, and it’s not something we would usually seek to inventory,” said Chairman Chris Fabricant. “So I didn’t know this was an issue until presently.”

He read through the criteria for inclusion on the list and paused when he got to “important builder, designer artist or architect.”

“No. Local artist and architect,” said Boas. “I mean, they’re important to us, because they live here in Red Bank, but it wasn’t Frank Lloyd Wright.”

According to a report in the now-defunct Red Bank Register, the building, tucked in among Victorian mansions converted to office space, was designed by the Red Bank architecture firm of Kaplan, Gaunt & DeSantis (now known as kgd Grammer Designs).

The commission voted unanimously to remove the property from the borough registry and end the need for the certificate.

Boas apologized on behalf of the board to the applicants for wasting their time.

• Fabricant announced the HPC’s attorney, Sean Byrnes, had resigned. No information about when or why was given.

Byrnes – the commission’s first-ever lawyer, appointed a year ago – offered to resign last month after Fabricant questioned his expertise in historic preservation law.

• The HPC approved signage requests by Relic Music, a guitar shop at 13 Monmouth Street, and Mark Sobel M.D., a physician at 206 Broad Street.

• After the public portion of the meeting, the HPC went into a closed-door executive session, over Fabricant’s opposition, to discuss an unspecified “personnel” issue.