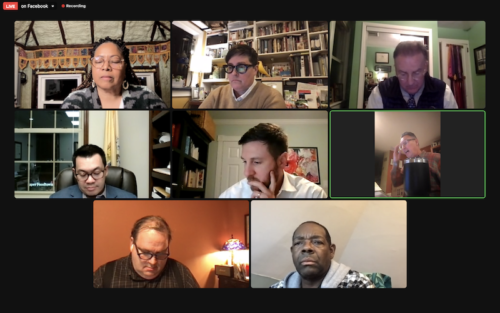 Appearing as the final witnesses for phase one of the commission’s review, both Ed Zipprich and Michael Ballard defended the borough form of government in place since 1908, and recent changes to shift power away from the town’s unelected administrator.

During a special session that ran for almost three and half hours, commissioner and former councilman Mark Taylor pressed hardest on Zipprich, a fifth-term councilman who also serves as chairman of the local Democratic organization.

Taylor’s topics included what he described as the difficulties faced by unaffiliated candidates, the absence of strategic plan for the borough and “issues getting politicized instead of addressed.”

At several points, Taylor, a lawyer, interrupted Zipprich to demand that he answer with a yes-or-no.

Taylor asked Zipprich if he thinks it appropriate that a sitting councilman is also the municipal party chair.

“Why not?” Zipprich replied, after a long pause. “There’s a very distinct difference between being a government official and following a code of ethics and… being a member of a political party and an official in a political party.

“There’s a distinct difference between political and legislative,” he said.

Taylor’s questioning of Ballard was also confrontational, if less combative.

Quoting Ballard, who had said part of his council role is to “sit over” committees, Taylor asked, “is that really the role of the liaison, to ‘sit over’ the committees?”

“I don’t mean to be argumentative, but who shouldn’t I be speaking to?” Ballard said. “I don’t understand what that means.”

“What issues come up that you have to speak to an individual employee that you can’t speak [about] to the borough administrator or an individual department head?” Taylor asked.

“I want an unfiltered, unvarnished opinion about what’s going on inside borough hall and throughout the town,” Ballard said. “If you only have one voice telling you what’s going on,” he said that person is going to share “what he wants you to know, what he feels you should know.

“In order to be an effective legislator and policymaker, you need to know what’s going on,” Ballard said. When employees reach out to him, he said, “I’m not going to tell them, ‘don’t talk to me.'”

In response to questions by other commission members, both Zipprich and Ballard lauded the borough form of government for the up-close interaction between elected representatives and borough employees that it provides.

Having each council member serve on department-specific committees, and participate in monthly meetings with department heads and the borough administrator, offers “a good flow of information,” Zipprich said. “It makes for very educated decisions.”

Afterward, Chairwoman Nancy Facey-Blackwood remarked that Zipprich and Ballard brought points of view that were “distinctively different than those we’ve had from other interviewees.”

Prior witnesses have included the past two borough administrators, Mayor Pasquale Menna, two former council members, and two current council members, some of whom complained about “interference” in day-to-day borough operations by elected officials they did not name.

Since January, the commission has been reviewing the borough’s government structure with an eye toward recommending change. Voters would have to approve a new form of government by referendum, with one widely expected in November.

The commission’s members are Facey-Blackwood; Ben Forest, Kate Okeson, Taylor and Mike DuPont. Taylor and DuPont are former council members. They were empaneled after borough voters approved the creation of the commission by a two-to-one margin last November.

Okeson recused herself from interviewing Zipprich. Last month, along with Councilwoman Kathy Horgan, Okeson filed a lawsuit against Zipprich, the local Democratic organization, the borough itself and newly-seated Councilwoman Angela Mirandi , seeking to have Mirandi unseated.

Okeson did not ask questions of Ballard after he objected. Commission attorney Michael Collins noted that because the interviews were voluntary, Ballard could not be compelled to answer any questions.

The commission’s next session, scheduled for Tuesday, March 15, is to be a public hearing to review phase one of the commission’s work, which has been to focus on past and existing borough operations. The next phase is to review alternate forms of governance available under New Jersey law.

The commission expects to make its recommendations in July.