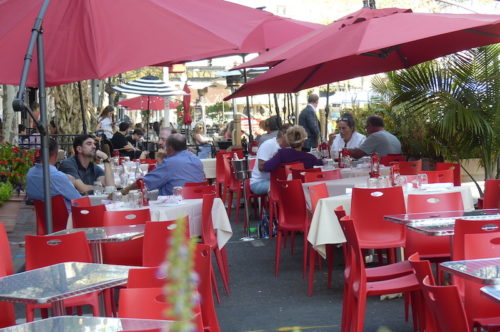 The informal consensus of the council was the first indication that the downtown car-free experiment, launched in the early months of the COVID-19 pandemic, would get a third edition. 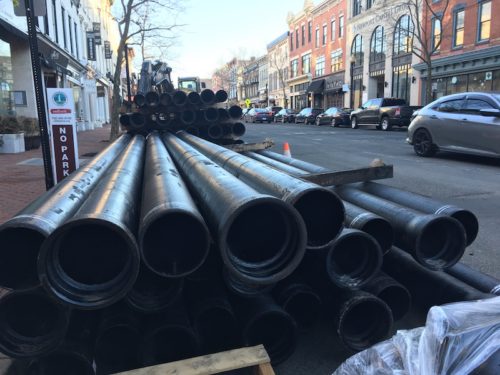 Replacement of water and sewer lines beneath Broad Street began in November. (Photo by John T. Ward. Click to enlarge.)

At a council workshop session that ran for more than three and half hours, the governing body agreed to forego laying down a “skim coat” of asphalt on a portion of the downtown street at an estimated cost of $70,000.

Instead, it will stick with the construction schedule, already months behind forecasts because of plan changes prompted by old, leaking water supply lines and a change order to install a new sanitary sewer.

Amid the debate over the streetscape project, a number of residents and business owners weighed in during the Zoom session on whether to bring back Broadwalk for a third summer.

The majority of commenters favored it, with restaurateurs speaking about the lifeline it gave them in the pandemic, as well as the competitive boost it gave the town against Asbury Park and other shore towns as the health crisis eased.

“We’ve got to do it,” said resident Boris Kofman. “We can’t take a step back after the success.”

In the minority was Mustillo’s gown shop owner Nicole Caivano, who cited number of impediments for shoppers, including reduced parking access, as well as aesthetic issues such as chewing gum on sidewalks and overflowing trash bins, as a reason to pull the plug.

“Broadwalk was a good short-term solution,” she said, but by the end of its second season was “overdone.”

“The original quaint, alfresco concept was not demonstrated,” she said.

Throughout the hearing, officials, business owners and residents addressed a call by Councilman Michael Ballard for a comprehensive plan for Broadwalk that addressed trash as well as traffic throughout town, parking, emergency access, impacts on businesses outside the zone and more.

“All of this stuff needs a real, concrete plan before we can even really consider whether Broadwalk should be reopened,” he said.

Others, though, said a Broadwalk restart can’t wait any longer than needed to complete construction.

Patrizia’s restaurant owner Louis Maschi said Broadwalk had been successful, largely because of quick action by the local government early in the pandemic.

Now, “if you don’t have a Broadwalk, you’re going to have businesses leave,” Maschi said. All remaining businesses will “suffer,” he said.

“With Broadwalk, we have taken away from Asbury and Long Branch. It is what we need,” he added.

“I think traffic is actually a good sign,” said Nicole Taetsch, of Hudson Avenue. Recalling the vacant streets of early in the pandemic, she said, “I don’t want this town to ever be that empty again.”

The option of temporary paving had been raised by interim Business Administrator Darren McConnell, who said the installation of new water and sewer lines was nearly complete and the road surface would need a 90-day settlement period before final paving could occur.

The skim coat would improve the appearance of the roadway and reduce tripping hazards left by numerous trenches dug during construction, he said.

“I would think most of May we’ll be under some sort of construction,” he said.

The cost estimate for the skim paving was based on laying it from Front Street to White Street, with the cost more than double if extended south to Harding Road, he said.

While several commenters pushed for it as a way to reduce the borough’s liability in the event of a trip-and-fall lawsuit, a consensus appeared when Councilwoman Jacqueline Sturdivant called it “foolish” to spend on the temporary surface instead of forging ahead to complete the project as planned.

“My priority, I think, for the town is to focus on safety,” Sturdivant said. “The best thing we can do is fix Broad Street completely and not have these interim fixes.”