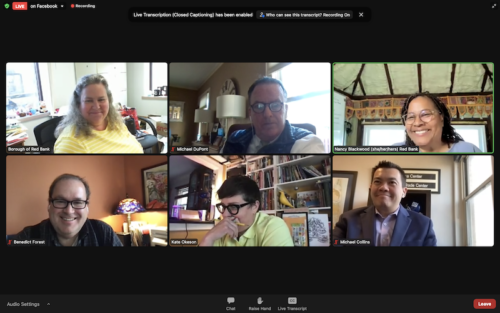 A screengrab of Wednesday’s meeting, held via Zoom. (Click to enlarge.)

But more have weighed in by email, according several commission members. And one consistent theme is that residents don’t want an appointed mayor, they said.

The commission is examining the effectiveness of the borough form of government in place in Red Bank since 1908, with the possibility of recommending a change in form that would be up for voter approval in November.

At the same time, voters may be asked to approve a change to nonpartisan elections.

Commission member Kate Okeson said that “one of the things that people are very clear on” in her interactions with residents “is making sure that every person that sits up there [on the council dais] has been put there by the people.”

Commissioner Mike DuPont, a former council member, said he had received “a bunch of phone calls and emails regarding the need to elect – that we have an elected mayor, an elected council. I think that’s been a constant theme.”

Another constant, in emails to the commission and questionnaire responses, said Chairwoman Nancy Facey-Blackwood, has been “about the ability to have changeover in government.”

While the commission “may not be able to control that” by imposing term limits, “it was good to see there was interest in that,” she said.

At the same time, member Ben Forest said he’s heard concerns about the frequency of elections, and suggested the commission explore whether to recommend a change away from the annual schedule.

One of the two participants in the public session, Irving Place resident Dan Riordan, said he’d prefer all offices be on the ballot at the same time.

In addition, the election process “takes too much attention away from governing,” he said.

“I think staggered is really important,” he said. “It will allow people to focus on the candidates,” as opposed to slates or a large number of individuals, he said.

According to Facey-Blackwood, the commission will discuss preferred forms of government in June. Commission Attorney Michael Collins will then write a report, which will include the ballot question to be asked. Public sessions and small group meetings will follow to disseminate the report and respond to questions, Blackwood said.

In the interim, at its May 17 meeting, the commission is expected to hear from elected officials in towns utilizing alternative forms of government under consideration. Information about the commission’s work so far can be found its website.

Posted on May 5, 2022 at 7:50 am, filed under Featured, Government, Politics, RED BANK and tagged ben forest, charter study, council, forms of government, kate okeson, mark taylor, mike dupont, nancy facey-blackwood, nj, nonpartisan elections, red bank. Bookmark the permalink. Follow any comments here with the RSS feed for this post. Trackbacks are closed, but you can post a comment. Email this story.
PREVIOUS: ON THE GREEN: OFF-AND-ON RAIN IN FORECAST NEXT: RED BANK: CRIME & ARREST REPORTS