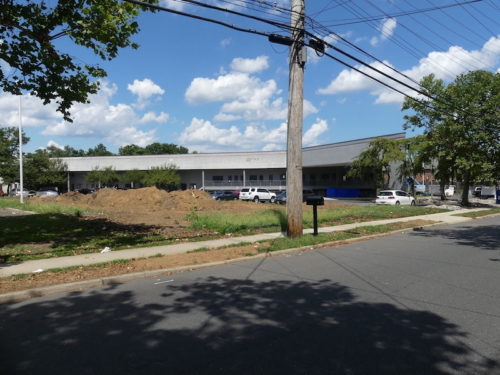 Something’s up – finally – at an eyesore lot on Drs. James Parker Boulevard in Red Bank. And the large office building next door is getting some attention, too. After a vacant house was torn down about a decade ago, the trash-strewn lot at 26 Drs. Parker sat idle for years. It’s seen here in 2014. (Photos by John T. Ward. Click to enlarge.)

The lot in question is at 26 Drs. James Parker Boulevard, across the street from the Monmouth Day Care Center. It’s also next door to an office building at 10 Drs. Parker, alongside New Jersey Transit’s North Jersey Coast Line tracks.

The narrow lot has been neglected for years, with rainwater and trash often collecting where a house was demolished about a decade ago.

In recent days, though, the site has been cleared of brush, with evidence of earth-moving. And workers have been busily re-skinning and painting the 27,000-square-foot office building, noted for its fiercely pointed two-story portico.

Coincidence? No. The office building changed hands last December, when brothers Alex and Lucio Cardoso Jr. bought it for $3.6 million, according to Monmouth County records. They followed up in March with the addition of the vacant lot, for $200,000.

Alex Cardoso told redbankgreen Monday that Lucio, a dentist, plans to occupy the main floor with his oral and facial cosmetic dentistry practice.

The empty lot was acquired “to incorporate it with” the office building as parking, he said.