RED BANK: HONK IF YOU LOVE THIS REHAB JOB 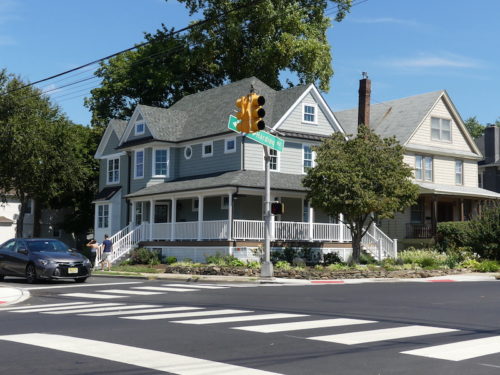 Home restorers Carole-Ann Gorhan and Roger Palacio have been getting a lot of attention from passersby in Red Bank in recent months.

Motorists have been tooting horns, and pedestrians have been stopping to thank them for bringing the house at 42 Harding Road back to life. 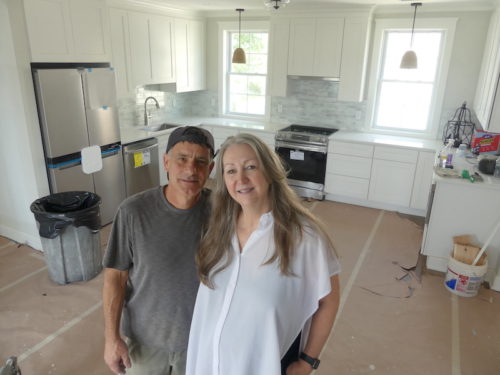 Roger Palacio and Carole-Ann Gorhan in the nearly completed second-floor kitchen last month. Below, the house as it appeared in April, 2021. (Photos by John T. Ward. Click to enlarge.)

Certainly, the house isn’t the first, last or only one in town to get a rehab job. But because of its prominent location, at the five corners intersection with Harding Road and Branch Avenue, its new lease on life has apparently struck a chord with the public.

“If I’m out there watering the flowers, at least four or five people will say something – ‘Oh, it looks beautiful,’ or ‘love the yard,’ ‘I’ve been watching it,'” said Gorhan, a kitchen designer by profession.

“Drivers stop at the light. They honk, or they yell out. They’re just happy,” said Palacio. “They’re glad we didn’t tear it down.”

The couple, who live in Marlboro and have rehabbed several homes in Monmouth and Middlesex counties, bought the two-family house in 2017 for $385,000 from Ken Tumia, whose family had owned it since 1979, according to Monmouth County records.

Built in 1910, the house was known to operate as a speakeasy during Prohibition, which explained the red bulb Tumia used to light the Hudson Avenue side of the porch, a sly wink at that history, Palacio said.

While negotiating the deal with Tumia, Gorhan recalled hanging out during the 1970s in the room that’s now the first-floor kitchen with friends who were tenants.

Using plans drawn by Red Bank architect Ed O’Neill, of SOME Architects, Palacio, a multiskilled craftsman, did all the remodeling work, which included expanding the kitchens, creating coffered ceilings and more. But when he first saw the place, he wanted nothing to do with it.

“I thought, some poor bastard’s going to get this place and regret it,” he said. “It was in bad shape.”

“I don’t know how it didn’t burn down, honestly,” said Gorhan, noting loose wiring and other safety issues. “It was a little scary.”

“But this plan is what Kenny wanted to do,” Palacio said. “He just couldn’t afford it.”

The remodeling called for a “complete gut job” inside, Palacio. A two-story addition on the rear of the structure added two rooms, plus a second bathroom, to each apartment.

During the project, largely owing to effects of the COVID-19 pandemic, materials prices skyrocketed. But the couple stuck to their plans.

“The way we wanted to do this was the way we did it,” Palacio said. “You do it the right way. I don’t know how you can live with yourself if you don’t.”

Gorhan and Palacio, who initially imagined living in the house, now plan to sell the property, with a listed price of $1.4 million. Meantime, they’re beginning to look for another project to tackle.

“This one will be a tough one to let go of,” Palacio said.