Once or twice a week in recent months, commuters stuck at a rail crossing in Red Bank might have seen something that struck them as odd: small clusters of camera-wielding observers savoring the movements of a giant freight engine. 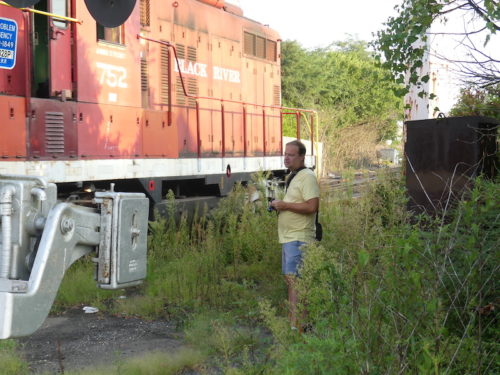 Marc Pitanza went into the weeds to get photos of the engine as it passed. (Photos by John T. Ward. Click to enlarge.)

What’s Going On Here? Well, the Delaware and Raritan River Railroad recently leased the line, known as the Southern Branch, between Red Bank and South Lakewood from Conrail.

That change was all it took to send a rumble of excitement through locals who call themselves railfans.

“It means a new mode of power, a more colorful mode of power, literally,” Red Bank resident Marc Pitanza told redbankgreen as he photographed the Black River 752, a faded red engine from 1956 that once pulled tourist cars through the Pacific Northwest.

Also out that August morning was Donny Fortunato of Neptune, a 24-year-old civil engineering student at Rutgers.

For nearly half his life, Fortunato has been photographing and videorecording trains, making lots of friends in the process through online chat groups and at railside gatherings.

What’s the attraction of trains? “Really, it comes down to, it’s something to do,” Fortunato said. History plays a part in it, too.

“It’s interesting because not many people know about this,” he said. They see the tracks over the Parkway, or go over these tracks, and they’re like, ‘oh, they’re abandoned.’ Not many people know that these tracks are relatively active,” carrying bulk products to customers including Lawes Fuel in Shrewsbury and Woodhaven Lumber in Lakewood, he said.

With the change in carriers, Conrail, instead of hauling freight all the way to Lakewood, drops it in the Red Bank yard, where D&R picks it up on Tuesdays and Fridays, Fortunato said.

Fortunato had taken the day off from his summer job to chase the engine along its full round-trip route, videorecording it from multiple points along the way for his YouTube channel, Jersey Shore Rail Productions.

He was excited, he said. “This is my first day chasing this new operation,” he said.

“I decided to go all-out” with the round-trip pursuit, he wrote under the completed video. “I will admit, it seemed weird chasing a train that wasn’t Conrail after all those years of chasing SA-31, but I am hopeful for this line’s future.”

Fortunato’s video followed a machine that he referred to as “rolling history” departing Red Bank shortly before 7:30 a.m. But the two-man crew was aboard another engine as they crossed Patterson Avenue in Shrewsbury seven hours later enroute to the Red Bank yard.

In between, thanks to drone footage, Fortunato captured maneuvers that made the switch of engines possible.

That morning, for the start of the run, Pitanza, a book buyer for the store at the Museum of Modern Art by day, was also out to document the engine’s departure with his camera. He posts the pictures on railfan pages on social media.

Trains, and model trains, have been a lifelong interest, something he picked up from his father, he said.

“I find them fascinating as machines,” said Pitanza, author of the book ‘Staten Island Rapid Transit.’

“Just watching them work is fascinating for me, even seeing it over and over again. And they’re not as common as cars, right? Or trucks, or buses, all modes of transportation that I adore as well. But they’re unique.”

Pitanza notes that the freight line through Red Bank was once a busy passenger route between Jersey City and Atlantic City, featuring the Blue Comet, a swank means of travel in the 1930s. (The train’s observation car is now part of the Clinton Station Diner, in Hunterdon County.).