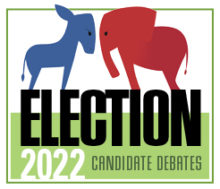 Red Bank voters will get two chances – or one and a half – this week to size up the candidates in the November 8 municipal elections.

Only one will be in-person. And neither will feature all five candidates.

• First up is the West Side Community Group 27th annual Candidate’s Night, an in-person forum scheduled from 7 to 9 p.m. Wednesday at Triumph Brewing Company.

But as previously reported, the two Democratic council candidates, incumbent Angela Mirandi and running mate John Jackson, won’t be there.

In addition to objecting to the location – “I don’t think a bar is a conducive setting for a serious conversation and debate,” Mirandi told redbankgreen earlier this month” – she doesn’t believe event moderator Amy Goldsmith “can be considered a neutral. moderator” because she’s married to activist Ben Forest, a member of the recently reconstituted Red Bank Democratic Committee.

That committee “has not recognized or supported Mr. Jackson or myself as their Democratic candidates,” Mirandi said. “In fact, many of the Red Bank Democratic Committee members have demonstrated and voiced their support for the Republican candidates with no basis other than their hatred for the former Chair,” Ed Zipprich, she said.

The WSCG event has traditionally been held at the River Street Commons, a senior citizen’s apartment complex. But this year’s event is being held at Triumph out of “an abundance of caution for the seniors,” Goldsmith told the candidates in an email.

• All four council candidates have confirmed to redbankgreen that they plan to participate in a League of Women Voters of Monmouth County forum at 3 p.m. Saturday.

Because he is unopposed in his campaign to succeed Pasquale Menna as mayor, Portman was not invited to participate, according to the LWV’s announcement of the event issued Sunday.

That event will be virtual-only, via Zoom; connection and participation details can be found here.