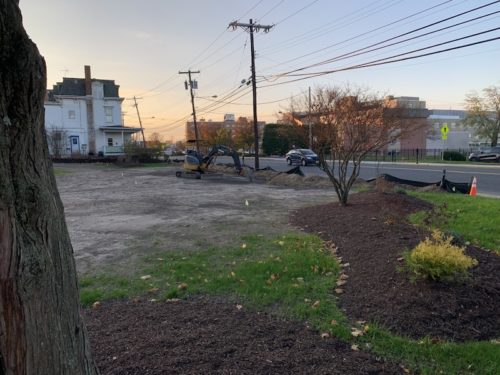 Some readers have noticed earthmoving activity at the corner of Spring and East Front streets in Red Bank lately and wondered: What’s Going On Here? 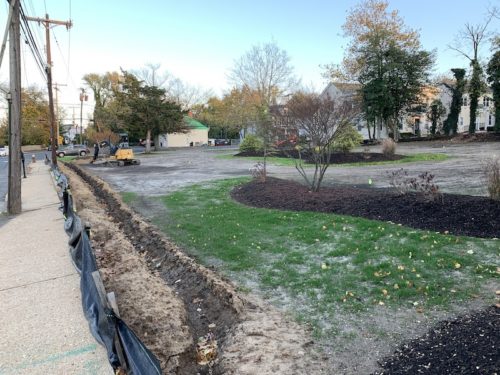 The lot as it appeared last week, above, and in December, 2020, below. (Photos by John T. Ward. Click to enlarge.)

Riverview Medical Center owns the vacant half-acre lot, which for several years has been nothing but bare soil surrounded by construction fencing.

Hospital spokesman Tony Perry had little to say in response to redbankgreen questions about the activity, which includes tree and grass planting and the removal of the fence.

“Just merely landscaping the vacant lot,” Perry said via email. “Not creating anything.”

“There are currently no plans for the property,” he said.

As previously reported by redbankgreen, the parcel, at 96-98 East Front, is one of several acquired by the hospital in recent years that remain unused, without any publicly disclosed development plans.

This one has a curious history.

Healthcare facilities contractor Geoff Pierini bought the three adjoining parcels that now comprise the property in mid-2017, paying a total $1.25 million. Less than two years later, he secured planning board approval to construct a medical office building – with a car elevator serving an underground garage – on the site.

But in late 2020, with only demolition work having been done, Riverview paid Pierini $5.75 million for the property, four times his acquisition cost.

Why the hospital paid such a steep markup has never been answered. And to date, Riverview has made no move to develop the property, whether using Pierini’s approved plans or others.

While the nonprofit hospital, which is owned by Hackensack Meridian Health, pays no taxes on real estate used for healthcare delivery and support, such as offices and parking, it pays taxes on its unused holdings. For this lot, payments totaled less than $6,600 this year.

CORRECTION: The $6,600 reported here was for only one of three adjoining lots that comprise the hospital’s holdings at the corner. The total paid in 2022 for all three was $22,248.

Check out redbankgreen’s GIF of one of the houses getting demolished in May, 2020.