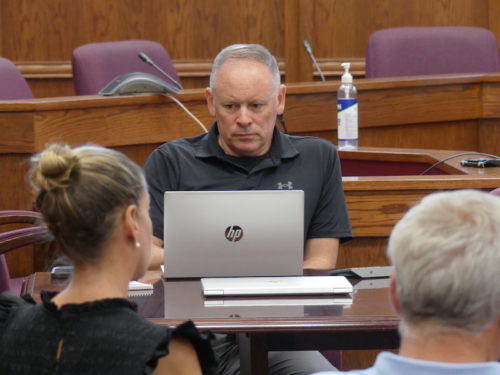 Red Bank’s council has hit the brakes in its search for a new borough administrator, redbankgreen has learned.

“It is my understanding that Council is not moving forward with the appointment of a new Business Administrator at this time,” Antonelli told redbankgreen Thursday via email in response to an inquiry.

He said he had “no further information.”

Citing personnel matters and contract negotiations, borough officials have been tightlipped about the search to replace Darren McConnell, the police chief who has doubled as the town’s top executive since Ziad Shehady resigned in May, 2021.

Councilman Ed Zipprich, who leads a four-person bloc on the all-Democratic council that pushed for filling the administrator position, did not respond to an emailed request for comment Thursday. Nor did Councilwoman Angela Mirandi, who chairs both the personnel and finance committees.

Mirandi and Zipprich, along with council members Michael Ballard and Jacqueline Sturdivant, have previously cast aside objections from the council’s other two members to find a replacement for McConnell, citing a desire to keep the jobs of chief and administrator separate.

Councilwoman Kathy Horgan, who has resisted replacing McConnell, told redbankgreen via text on Thursday that she was “not aware” that the hiring had been paused.

She and her lone ally on the dais, Councilwoman Kate Triggiano, have opposed efforts to replace McConnell before January, when a new mayor, Billy Portman, and council member, John Jackson, are slated to get on board.

Moreover, Horgan told redbankgreen in October, “the borough already has an Acting BA who knows the lay of the land and has been working in Red Bank for over 30 years.”

Horgan, who did not seek re-election last month, is concluding a 16-year tenure on the council when it holds its final workshop and regular sessions next Wednesday night.

“At a time when the borough is going through so many changes, we need a constant,” Triggiano told redbankgreen via email Thursday. “Chief McConnell is serving the borough well as interim administrator. He has the institutional knowledge, skills, and investment in the Borough to see us through this transition.

“We are months away from a May election and changing the form of our government,” she said. “After these transitions take place, that is the correct time for this crucial role to be addressed with full attention.”

In May, the borough is required to hold an election for mayor and all six council spots, in accordance with voter approval of a referendum last month to change the municipal government structure.

McConnell, a 34-year borough employee who is being paid a $7,500-per-month stipend for his work as administrator on top of his police salary, has previously said he has little involvement in the search for a successor in order to avoid conflicts of interest.

“I haven’t heard a word about possible replacement in a while now,” he told redbankgreen Wednesday.

In September, 2021, when a Triggiano/Horgan faction controlled the council, the search for a successor for Shehady was indefinitely paused, leading Ballard, then in the minority, to complain he had not been informed of the change in direction. Since then, Ballard has repeatedly cited the incident to rebut complaints that the current majority acts without consulting with the minority.