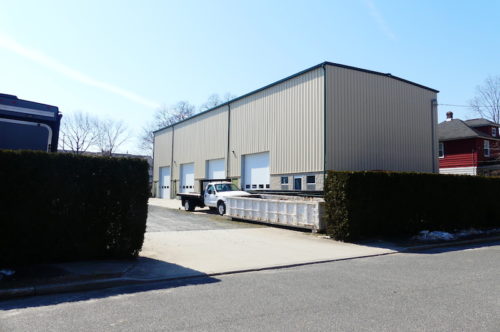 The facility would operate in three buildings now used for warehousing at 15 East Leonard Street. (Photo by John T. Ward. Click to enlarge.)

Before granting approval, however, planning board members had to overcome misgivings about an all-cash operation – and an electrified security fence meant to give intruders a “kick in the chest” without killing them. 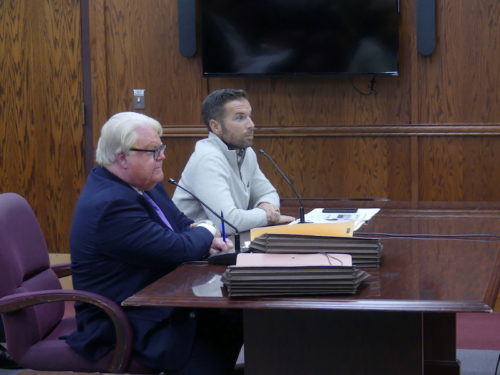 Alexander Federico, with lawyer Ed McKenna, testifying about the project. Below, a site map. (Photo by John T. Ward. Click to enlarge.) 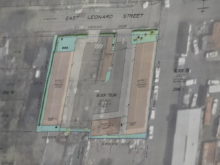 Concerns about security and odors dominated the hearing.

On the table was a request to change the usage, from warehouse to cannabis cultivator, of the property at 15 East Leonard Street.

Property owner and applicant Susan Duckworth did not testify. She and her father, Bob Duckworth, will be partners in the operation, said Alexander Federico, an executive with Full Spectrum Biotech, based near Los Angeles, which supplies cannabis and related products throughout California.

Federico described an operation that would have six to eight employees most of the year, with additional workers brought in for harvesting and drying every 11 to 15 weeks.

There would be no retail sales at the site, he said. Full Spectrum would serve as a bulk supplier to other businesses that would brand and sell the product under their own labels.

The site, which occupies about eight-tenths of an acre, with residential properties on three sides and a freight rail line on the fourth, would have 24/7 armed security guards, “sirens, horns and cameras,” he said.

Anyone entering or leaving the site, except for routine FedEx and similar delivery drivers, would need an appointment and security code, he said.

The site, which is to be surrounded by an eight-foot-tall security fence, would also have a second, interior fence six to twelve inches away. The electrified second fence would deliver a non-lethal jolt to anyone who came in contact with it, he said.

“It’s like getting kicked in the chest,” said Federico. “It’s more a deterrent than anything.”

The second fence, which had gone unmentioned earlier in the hearing by an architect and a planner, caught board members, and board engineer Ed Herrman, of T&M Associates, by surprise.

Thanks to an advanced filtration system. “the air going out is odorless,” Federico told the board. “I promise you you will not smell anything.”

In the event of a power failure affecting the climate system, a backup generator will kick on, he said.

In 2020, New Jersey voters approved a change to the state constitution to legalize possession and use of marijuana by individuals aged 21 and older. The measure, endorsed by 67 percent of voters, also legalized the cultivation, processing and retail sale of “adult-use” cannabis.

Following passage of legalization, the Red Bank council approved an ordinance in August, 2021, that designated zones for growing, warehousing and retailing of the herb. As per state law, the borough would collect a local excise retail tax of 1 percent for wholesale sales and 2 percent for percent.

No specific objections were raised by members of the audience, though Leonard Street homeowner Don Campbell expressed concern about quality of life issues.

“It’s a little bit something different,” he said of the project.

Viscomi said she was concerned about background checks for anyone carrying a gun. Federico said that would be the purview of a the security vendor.

Approval of the application was conditioned on Full Spectrum revising its fencing and landscaping plans in consultation with Herrman, for possible ratification by the full board when it takes up a resolution of approval, possibly at its next meeting.

Only one board member, Juanita Lewis, voted against the plan; she did not say why. David Cassidy, who in 2021 was only member to oppose allowing cannabis operations so close to homes, at first said he would abstain on the Duckworth application, but changed his vote to yes on the basis of the family’s “outstanding” reputation. He was joined by Chairman Dan Mancuso, Vice Chairman Art Murphy and members Fred Stone, Barbara Boas and Kristina Bonatakis.

After the meeting, Federico, a graduate of Red Bank Catholic High, told redbankgreen that Full Spectrum obtained a conditional class 1 cultivator license from the New Jersey Cannabis Regulatory Commission in late October, and had 120 days to secure local approvals before it can return to Trenton to convert it to an annual license.

As reported by redbankgreen, homebuilder Charlie Farkouh filed an application in early 2021 to create a medical marijuana growing facility on the Duckworth site, but the plan was not pursued.