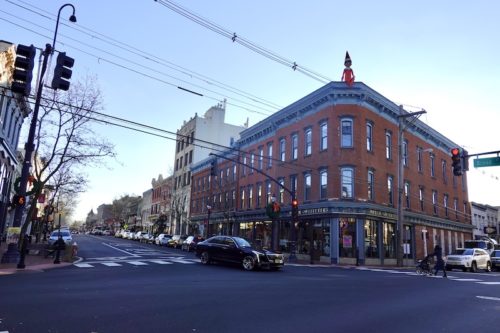 Bringing his annual dose of Christmas merriment, the Saxum Elf kept watch over the intersection of Broad and Front streets in downtown Red Bank Thursday.

The elf, who moves around throughout the holiday season as part of a downtown scavenger hunt, might also keep an eye on the sky, with an outdoor Christmas show by the Wag slated for Saturday evening in Riverside Gardens Park.

According to the to the National Weather Service, the forcast calls for sunshine Friday; rain and wind Saturday, but with skies clearing by evening; and sunshine returning Sunday. Check out the extended forecast below. (Reader photo. Click to enlarge.)