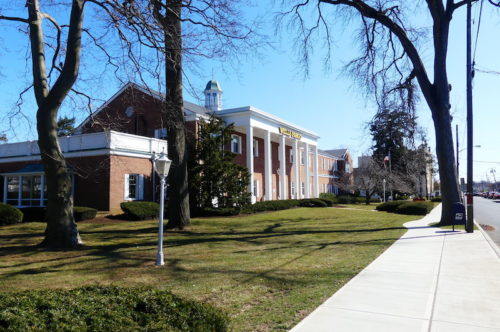 A sign recently installed outside one of Red Bank’s most prominent business addresses says there’s space “for lease” in the building, now home to a single tenant: Wells Fargo Bank.

According to commercial real estate broker Suzanne Macnow, of CBRE, Wells Fargo is not moving out, but “downsizing and giving back the lower level and second floor” at at 303 Broad Street.

The 26,000-square-foot building, which sits on a 3.5-acre property at the corner of East Bergen Place, is owned by Grace Acquisitions NJ LLC, in Lakewood. The building was erected as a banking operation in 1965 and has been home to a succession of industry players since then.

Wells Fargo has leased the property since 2004.

The bank won borough planning board approval in March, 2021, for a new plan to light the sprawling site, which wraps around three houses on East Bergen Place. The changes were needed in order to meet state regulations for security lighting, a manager testified.

At the time, there was buzz about the possibility that the property might someday become a new home to the municipal government, replacing 90 Monmouth Street as borough hall. As reported by redbankgreen, the Redevelopment Agency had authorized an architect to “do a concept design” to see if the site could accommodate  borough offices, the police department and municipal court.

But the idea, like everything else the agency was working on, was shelved when the borough council dissolved the agency last April.

Posted on December 1, 2022 at 7:00 am, filed under Featured, Government, Land Use & Zoning, Law & Justice, Real Estate, RED BANK, What's Going On Here? and tagged 303 broad street, borough hall, Grace Aquisitions NJ LLC, land use, planning board, red bank, redevelopment, suzanne macnow, wells fargo, what's going on here. Bookmark the permalink. Follow any comments here with the RSS feed for this post. Trackbacks are closed, but you can post a comment. Email this story.
PREVIOUS: RED BANK: SOME VOTERS HAD OTHER IDEAS NEXT: RED BANK: YO, ELF, WHAT’S THE OUTLOOK?