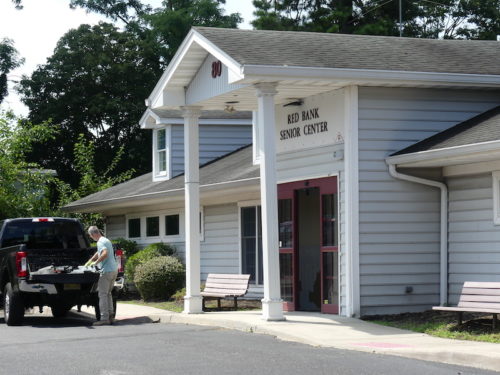 Red Bank residents begin their fifth year without access to the borough’s  Senior Center this month.

What’s up with the repairs to the long-closed facility?

The center, on Shrewsbury Avenue overlooking the Navesink River, has been out of commission since it was damaged by a fire suppression system malfunction during an extended freeze in January, 2019.

Whether and when to repair the one-story building became a political wedge that bitterly divided the all-Democratic council before a $1.94 million repair plan was set last February.

By September, repairs were “coming along nicely” and expected to be finished by late fall, interim Administrator Darren McConnell told redbankgreen at the time.

But now, completion of the work has been delayed by a market shortage of key items: in particular, doors, windows and hardware, public utilities director Cliff Keen told the council at its December 14 workshop session.

“Our contractor is facing the same material delays that most other contractors are facing right now,” Keen said. “It looks like we may be talking a bit longer for the doors and windows to be delivered.”

Keen said he could not provide a completion date.

“I hate to give an end date, because I can’t guarantee anything in this climate,” he said. “Every company is facing the same thing, with labor shortages and material supply issues.”

Without the new doors and windows, the facility cannot be clad in new siding as planned, Keen said.

“Once those are in, that should wrap up the project,” he said.

As of Tuesday, there was no update on the delivery of the awaited materials, McConnell told redbankgreen.

Since May, 2021, the Senior Center has operated in leased space at the Trinity Episcopal Church on White Street.