‘The Godfather,’ a chicken dish from the low-carb section of the menu.

Stores and other businesses may still be slinking out of Red Bank in the dead of night, but there are signs of economic strength, too.

The latest is the bizarrely-named Muscle Maker Grill, a restaurant that opened its West Front Street doors on Wednesday.

END_OF_DOCUMENT_TOKEN_TO_BE_REPLACED

A PASSION FOR PIGSKIN, UPDATED DAILY 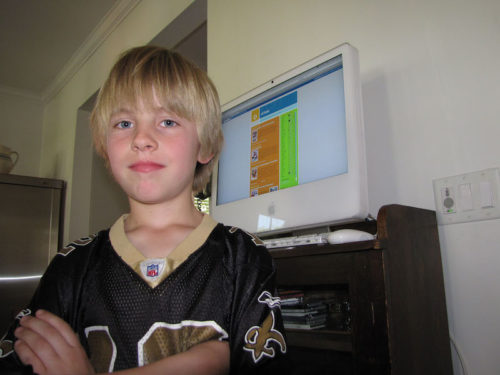 Kees Van Hemmen and the kitchen desktop from which he publishes his blog. Below, a post in progress. (Click to enlarge)

This just in, sports fans: One of the newest entries into the burgeoning sports media scene is the product of an 8-year-old Fair Haven boy.

END_OF_DOCUMENT_TOKEN_TO_BE_REPLACED

The proposed line would link Lakehurst with the North Jersey Coast Line at the Red Bank train station, above.

Just a day after the announcement of a so-called compromise transit plan that would have directed a new commuter rail line into Red Bank, the Monmouth County Freeholders flatly rejected the idea, today’s Asbury Park Press reports.

The move appeared to isolate deputy freeholder director John D’Amico, one of the majority Democrats on the board, who had expressed support for the plan with New Jersey Transit.

According to Press reporter Larry Higgs,

D’Amico backpedaled, saying his support for the Red Bank route was only conditional because the transit agency “has made its mind up” against rail options relying on routes through Middlesex County.

END_OF_DOCUMENT_TOKEN_TO_BE_REPLACED

OUTLOOK: RAIN GARDEN MAY GET ITS FILL

The garden, the result of work and materials donated by Siciliano Landscaping, Molzon Garden Center and the Navesink Garden Club, is irrigated by the library's rain gutters.

A new rain garden at the Red Bank Public Library could be in for a good soaking over the next few days.

Today: Showers likely and possibly a thunderstorm before 7am,
then a chance of showers and thunderstorms between 7am and noon, then a
chance of thunderstorms after noon. Some of the storms could produce
small hail and gusty winds. Mostly cloudy, with a high near 76. East
wind 5 to 8 mph becoming west. Chance of precipitation is 70%. New
rainfall amounts between a quarter and half of an inch possible.

END_OF_DOCUMENT_TOKEN_TO_BE_REPLACED

THE OTHER GARDEN TOUR

Among the six stops on the tour: Linda Vaccaro’s garden at the corner of Lake Avenue and Harvard Road. (Click photos to enlarge)

As noted below, today’s edition of Red Bank oRBit has a feature about the Two Rivers Garden Tour and its return to its horticultural roots as it shelves a traditional companion antiques show this year because of economic conditions.

But it’s no longer the only flower show in town.

Now in its 59th year of existence, the Garden Club of Fair Haven is holding its first garden tour on Saturday, with stops at five residences and another at the Harding Bird Sanctuary on Ridge Road.

Taken together, the simultaneous, geographically overlapping events may drive flower lovers to distraction  or nirvana.

END_OF_DOCUMENT_TOKEN_TO_BE_REPLACED

Today’s edition of Red Bank oRBit gets a jump on the weekend via an
interview with a performer we call The Hardest Working Woman in
Shore Business.

That would be Jody Joseph  cousin to both Jon Bon Jovi and  Mario Lanza, and a favorite on the local club scene. She takes it up
a notch this Saturday with her theater-size show entitled ONE LEGEND, ONE
DIVA, ONE WOMAN.

It’s a salute to both Janis Joplin and Stevie Nicks (as well as a showcase
for some Jody Jo originals), and we talk to the star about what these music
icons have in common  while finding out what her cousin had to say about
her greatest onstage fear.

Then, from backstage at the Paramount we go to the backyards of Rumson and Fair
Haven to catch the return of the annual Two Rivers Garden Tour. As Dorothy
Creamer explains, it’s a two-day event that goes without the traditional
Antiques Show this year  but, for most of us, it’ll be the closest view
we’ll get of the Gooch family back yard without having won a Heisman Trophy.

All this plus our weekend recommendations from The Orb, only in Red Bank oRBit.

Much to our surprise, last week's 'Where Have I Seen This?' attracted just two guesses.

They both came from the same reader. And both were wrong.

END_OF_DOCUMENT_TOKEN_TO_BE_REPLACED

The Red Bank station would be the northern terminus of a new commuter line from Lakehurst, linking central Ocean County to the North Jersey Coast Line.

Over the vehement objections of Red Bank officials, proponents of a new commuter rail line  that would link Lakehurst with points north yesterday designated the borough railroad station as a terminus.

Creation of the line would add some 40 grade crossings a day in Red Bank, creating havoc for automotive traffic, said Councilman Mike DuPont.

The so-called Monmouth-Ocean-Middlesex, or MOM line, would also worsen the economic divide between the west and east sides of town at a time when the local government and business interests are working to erase it, said Mayor Pasquale Menna.

DuPont and Menna vowed to fight the plan, which was advanced yesterday as part of three-county "compromise" that removed the possibility of the line actually being built into Middlesex County, one of three routes under consideration.

"It's going to be the seminal issue for this area," Menna said at Tuesday's bimonthly council session. "It's just not going to happen."

END_OF_DOCUMENT_TOKEN_TO_BE_REPLACED

About 400 friends and family members gathered at the 6th Motor Transport Battallion reserve center in Lincroft yesterday to say goodbye to 137 Marine reservists headed to Iraq.

Some of the Marines were embarking on their third tour.

Brian Donohue of the Star-Ledger’s Ledger Live was there with his video camera and caught these poignant moments.

END_OF_DOCUMENT_TOKEN_TO_BE_REPLACED

Over on our satellite site Red Bank oRBit, we’ve vowed to give you a little
culture if it kills you. Fortunately, what we’ve scouted out for you in
today’s edition is a range of options that are, well, downright
fun.

We’ve known the ladies from Book It! Events as savvy promoters and expert
facilitators who’ve brought some glamorous and exciting authors to the
greater Red Bank area. With the imminent opening of their new “literary salon” in he Grove at Shrewsbury, Jacquie Fiorito and Kim Widener
have raised the bar again on the art of the personal appearance  with
familiar TV faces Jack Ford and Janice Lieberman, Pulitzer winner Joyce Carol Oates and Hollywood dog trainer Joel Silverman among the fascinating authors they’ll be bringing to The Grove and other local venues this summer.
We’ve got a first look at what’s in store.

From there, we take you on a quick tour of what’s new and current in Shore
art galleries, from the latest edition of the annual Fresh Meat/ Young Blood
group show at SICA in Long Branch to an eye-popping display over at
Lincroft’s Monmouth Museum and a bevy of amazing things down Asbury way,
including a major retrospective on the visual art of DEVO mastermind Mark Mothersbaugh.

Red Bank oRBit  no summer reading list is complete without it.

Ever wondered what would happen if the soil under your home or yard suddenly became contaminated with heating oil?

And how much worse it would be if it wasn’t even your oil?

Today’s Asbury Park Press has a story about the travails of John & Pam Ross of Red Bank, who are “prisoners of their own house,” writes reporter Larry Higgs.

The Leighton Avenue couple have been stuck for two years, since oil from two homes away from theirs seeped onto their property, the Press reports.

END_OF_DOCUMENT_TOKEN_TO_BE_REPLACED

IS IT TOO LATE FOR ‘CONTROVERSY COVE?’

Contractors working on improvements to a nearby intersection are using the borough-owned lot as a staging area. A wooden form for making concrete slabs was built at center, and a load of stone was dropped closer to the river.

A publicly owned parcel of riverfront property that redbankgreen calls Whatchamacallit Park appears on its way finally to getting a new moniker: Maple Cove.

But that tidbit of news was all but swamped at Tuesday night’s meeting of the Red Bank council, when tempers flared over who’s doing what on the Navesink River site.

END_OF_DOCUMENT_TOKEN_TO_BE_REPLACED

Fashionistas with creations in the show include, from left, juniors Megan Norton and Marcella Schepp of Little Silver and freshman Azharia Damian of Red Bank.

Outre is in this Thursday when members of the Red Bank Regional High fashion club put on their annual display of clothing from local boutiques.

Mixed into the uptempo show will be student-made outfits made from magazines, aluminum foil, candy wrappers and other common forms of trash.

END_OF_DOCUMENT_TOKEN_TO_BE_REPLACED

Today’s edition of Red Bank oRBit offers a preview of something that’s
become a summertime staple:

the return of Red Bank Street Life, the series
of free outdoor mini-musicfests that take place at the sidewalks and
storefronts each Saturday night.

We’ll give you the rundown on the featured
talent for the 9th annual series, sponsored by Bank of America (what, you’d
rather they spent the bailout money on another fancy wastebasket?).

As Red Bank RiverCenter‘s Nancy Adams explains,there are some exciting
changes in store this year: new performers, new hours and more
scheduled events than ever before  including a Jazz & Blues
weekend that adds two extra sessions, on Saturday and Sunday afternoons.

Then we take it down to Tim McLoones Supper Club in Asbury Park, where we talk
to Emmy-winning comedienne Judy Gold (right), who returns Thursday with her
solo show MOMMY QUEEREST  a proudly opinionated, highly personal, naturally
funny work from the woman who brought you 25 QUESTIONS FOR A JEWISH MOTHER.

There’s more where that came from, and you know where to find it first  in
the pixelated pages of our sibling site, Red Bank oRBit.

Do you see green everywhere you go? As in money flying out the windows of poorly insulated buildings? Opportunities to improve energy efficiency at nearly every turn?

Then it may be time for you to suit up.

The Red Bank Environmental Commission is putting together a 'green team' to help guide the borough government through what it hopes will result in a certification from Sustainable Jersey for building efficiency and other measures.

Led by chairman Andres Simonson, the commission will put on a slide show about Sustainable Jersey at tonight's meeting of the mayor and council.

END_OF_DOCUMENT_TOKEN_TO_BE_REPLACED

‘FOUR WHITEHEADS ON A BENCH’

Photographer Bobbie Kingsley spotted this foursome clustered together opposite her Monmouth Street studio last week and “couldn’t resist” taking their picture, she tells redbankgreen. The women asked that they be identified by the headline above. (Photo courtesy of Bobbie Kingsley)