URBAN: A PERFECT FIT FOR DOWNTOWN? 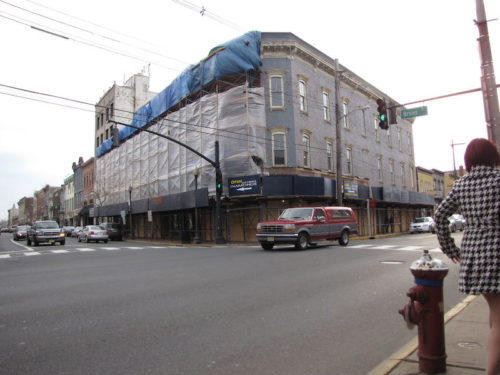 The future home of Urban Outfitters, as seen in late February.

In signing Urban Outfitters to take over the ground floor of a prominent Red Bank address, building owner Keith Alliotts has finally bagged what many retailers have long said is most needed downtown: a national chain with just the right amount of name recognition.
That is to say, one that’s big without being everywhere you look, yet has the cachet of an out-of-the way boutique.
“You won’t have a national that is in every mall in America,” says Nancy Adams, executive director of Red Bank RiverCenter, which markets the downtown. “This is one of the few nationals that prefers to be in a downtown.”

Contrary to a widely held view, Adams says resistance to national chains isn’t an official stance of RiverCenter. She says she’s “thrilled” that Urban Outfitters will be bringing its financial stability and marketing power to the corner of Broad and West Front streets  not to mention the power to draw legions of young shoppers.

In that regard, it’s also not Tiffany & Co., merchants and property owners note. For whatever effect the upscale jeweler and tchotchke seller may have had on the district since its arrival on Broad Street 18 months ago, Tiffany will likely prove no match for Urban in its ability to generate foot traffic, they believe.
“As much as Urban Outfitters is a competent retailer, they’re not high-end,” says Jay Herman, of Downtown Investors, which owns the building that’s home to a Merrill Lynch branch and other commercial properties.
Herman, predicts that Urban’s store will be “a major destination, a major attraction,” not only of consumers but of other retailers. The company’s decision to locate here “makes the rest of the town look better,” he says.
Urban officials have not yet responded to requests for comment. But according to sources, the company is committed to keeping the store open late, something that Mayor Pasquale Menna and a number of restaurateurs and other merchants have long urged businesses to do.
Philly-based Urban has New Jersey stores in Paramus and Montclair, and is planning to open one this summer in Menlo Park Mall in Edison. It’s Anthropologie subsidiary has a store in the Grove at Shrewsbury and five other Garden State locales.
The company, which sells clothing and housewares, describes itself in its latest annual report as catering to 18-to-30-year-olds who are “culturally sophisticated, self-expressive and concerned with acceptance by their peer group.”

Those customers also like to use the store as something of a meeting place, apparently:

Our stores accommodate our customers propensity not only to shop, but also to congregate with their peers.

Founded near the UPenn campus in 1970, Urban Outfitters is a publicly traded $1.8-billion a year juggernaut, posting compound growth of 27 over the past five fiscal years.

In an interview with redbankgreen, Alliotts would say only that the lease is a multiyear agreement, but sources tell us that its a 10-year deal, which is typical for Urban. The space is also in line with Urban’s average selling space of about 9,500 square feet.
Posted on May 21, 2009 at 11:52 am, filed under Business, Economy, Retailing. Bookmark the permalink. Follow any comments here with the RSS feed for this post. Trackbacks are closed, but you can post a comment. Email this story.
PREVIOUS: WHERE HAVE I SEEN THIS? NEXT: IN oRBit: ART IN THE PARK, CRAFT ON STAGE