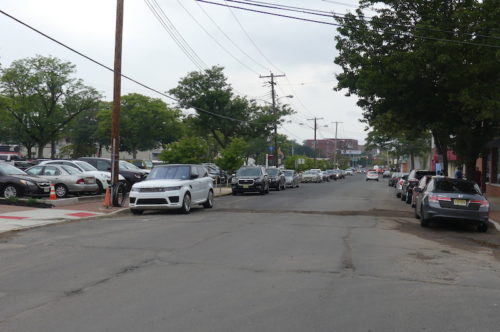 The sidewalk along the south side of White Street, at left, would be removed to allow for head-in angled parking on that side. (Photo by John T. Ward. Click to enlarge.)

An old-school approach to parking may soon return to one street in downtown Red Bank: angled parking.

The borough council informally agreed last week to remake a portion of White Street for angled parking on one side. 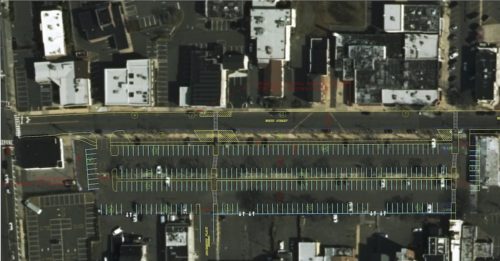 A concept plan shows new angled parking on White Street. Changes to the municipal parking lot also shown will not be made immediately. (Image by CME Associates. Click to enlarge.)

The plan calls for removing the sidewalk along the northern edge of the White Street municipal lot in order to widen the street by several feet. That would allow for the creation of 22 angled parking slots, Business Administrator Ziad Shehady said at the council’s monthly workshop session Wednesday night.

At the time, Shehady said the parking could be either head-in or back-in, but the back-in option appears to have been rejected.

In July, Shehady also suggested changes to the parking lot that the council did not discuss last week. They included closing the existing egress at White Street and the north end of Drummond Place and creating a mid-block pedestrian crossing, but those elements are not contemplated in the plan informally greenlighted by the council, he told redbankgreen in an email exchange last week.

Shehady said the plan “is conceptual only, to see how many spaces can be fit in a maximum scenario. We don’t have any cost estimates, nor have any decisions been made regarding landscaping and utility poles.”

The borough’s review is focused on White Street itself, and “not the parking lot yet,” Shehady said, “so that we can finalize design documents as part of the repaving of the street, which is being funded in part by a DOT grant received in 2018 for $350,000.”

That funding will be applied to a project that includes replacement of the water and sanitary sewer main replacement, curbing, sidewalks and paving, at a total estimated cost of $1.5 million, Shehady said.

“The angled parking is just a small component of the design that we were trying to incorporate as part of the project to maximize on street parking,” he said.

The White Street project dovetails with, but is separate from, a streetscape project now nearing completion under the auspices of Red Bank RiverCenter.

That project includes a makeover to the English Plaza parking lot, a new pedestrian walkway through the eastern end of the White Street lot, and sidewalk improvements between English Plaza and Broad Street.

The angled parking plan will have to be adopted by ordinance, which has not yet been formally introduced for public comment, and is not on the agenda for Wednesday’s session..

According to local historian Randall Gabrielan, angled parking was used downtown for decades, ending on Broad Street in the early 1950s, when it was replaced by parallel parking.

The council is also expected to take action at a future date on a proposal to replace both the coin-operated parking meters and the existing credit-card pay stations with new kiosks.

Details of the proposal have not yet been made public. The existing kiosks were installed in parking lots in 2012, and would have to be upgraded for 4G wireless technology.