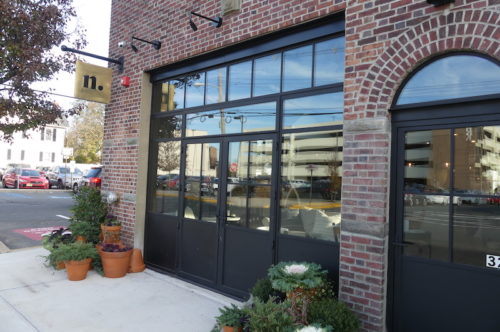 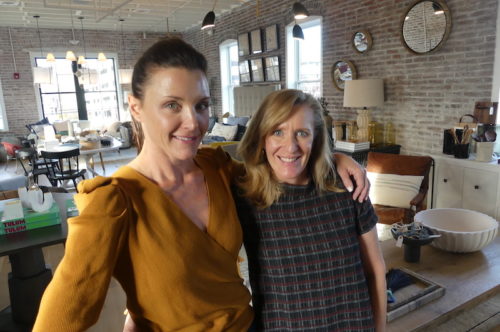 Kelli Suozzo and Jennifer Glassberg on the second floor of Nest. Below, wine is the primary focus of Bottles by Sickles. (Photos by John T. Ward. Click to enlarge)

• Bottles by Sickles, at 200 Monmouth Street, is the first foray into the alcohol business by Bob Sickles and family, owners of Sickles Market in Little Silver.

It’s also  the first retail operation to open at the former Anderson storage warehouse, which had been vacant for more than three decades.

Bottles occupies space just off the atrium, on the first floor of an addition to the original structure. Sometime in January, the Sickles family plans to open Sickles Market Provisions in adjacent, first-floor space within the original building.

“It’s a wonderful feeling to take our personal history to somewhere historical,” said company co-owner and marketing director Tori Sickles, whose family has run its Little Silver market for 111 years, on a farm that traces its roots to the 1660s. “Watching the building come back to life has been incredible.”

To get into the spirits business, Sickles acquired the dormant license of Heritage Liquors, which closed in August, 2014. The shop, which is still receiving inventory, is dominated by wines, and plans to feature a selection of New Jersey wines.

Advertising firm Sawtooth Group ended the building’s long dormancy when it relocated to the fourth floor in October. The remaining spaces are zoned for offices and spas.

• The former firehouse at 32 Mechanic Street, built in 1908, has been rehabilitated as the home to Nest, a two-story retail furniture store owned by Jennifer Glassberg of Little Silver and Kelli Suozzo of Rumson. Suozzo also houses her interior design shop, Bowerbird, in the rear of the first floor.

Glassberg and her husband, David Glassberg, a retired New York City police officer, bought the building from the borough at auction for $393,000 in 2016. Intent on preserving its “first responder” character, they restored the brickwork, which they supplemented with a supply of bricks acquired from a demolished 1860s-era house in Brooklyn.

Nest, said Suozzo, features an eclectic mix of vintage and contemporary furnishings. “We just bought things we love, trying to color outside the lines a bit,” she said.

A virtual twin to 32 Mechanic Street, also built in 1908, the Liberty house was sold at auction for $400,000 in 2014 to downtown property owner Morco. The company later won borough approval for conversion to house Ross Brewing Company with two apartments on the second floor. But no work appears to have been done. A Morco official did not respond to a request for an update sent early Friday.