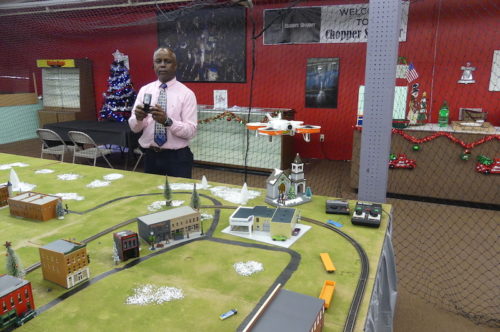 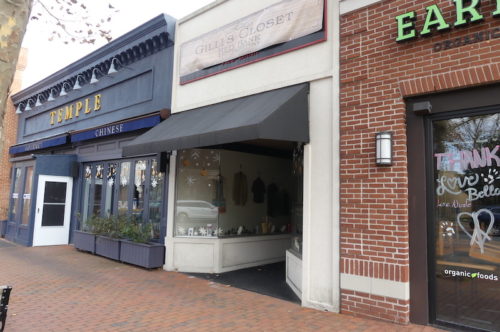 Gilli’s Closet is open for the holiday season at 93 Broad Street. (Photos by John T. Ward. Click to enlarge.)

• On the second floor of Hobbymasters, at 62 White Street, borough residents Thomas and Dionne Register have opened Chopper Shopper with an unusual business model.

On the one hand, its a space for indoor mini-drone flying, where newcomers to the activity can develop the “muscle memory” required for skilled control of the hand-sized devices, says Thomas Register.

On the other hand, Chopper Shopper is a marketing operation, enabling downtown businesses to promote themselves by offering coupons to players who snap photos of their “stores” using cameras built into the drones.

If it sounds odd, well, “it’s a new concept,” says Register, who sees the idea as “something that’s good for Red Bank,” because it can serve as a “magnet” to draw shoppers to town, and then incentivize them to go spend some money.

So far, he’s only got two businesses participating in the coupon service: Paradiddle Griddle, on West Front Street, and a personal care products store in Ocean Township. But he hopes to land more restaurants and stores.

Customers who want to buy their own mini drones can do so downstairs at Hobbymasters.

The second-floor space was previously occupied by Hobbymaster’s model train business, which has moved to the first-floor space vacated by Toymasters, an unrelated business that closed in late 2017.

Chopper Shopper plans a grand opening on Tuesday at 5:30 p.m.

• KarenJoseph Salon has opened at 8 East Front Street, in the former home of Kramer Portraits, which recently bought and moved into the former Queen Vacuum Cleaner space at 156 Monmouth Street.

• Gilli’s Closet Pop-Up Shop is operating for the holiday season in the space at 93 Broad Street that previously home to Jonathan Salon, which moved earlier this year to 68 White Street.

On the shelves and racks at Gilli’s are women’s clothing, men’s ties, arnica oil and holiday wreaths.

• Pella Windows has opened at 134-136 Broad Street. The building was long home to the the Professional Pharmacy, which closed in 2012, ending a 61-year run.

The rear portion of the space has been home to Pilates Blast for the past two years.