Here’s a ‘magic wand’ question for you: if you could instantly transform Shrewsbury Avenue in Red Bank, what would it become?

Ditto for creating direct access to the Navesink River from Broad Street: what’s your dream?

Borough residents and other interested parties will get to weigh in on those questions and more Wednesday night.

Also on the table: ideas for a Broad-to-the-River project. Below, a flier promoting Wednesday’s event. (Photo by John T. Ward. Click to enlarge.) 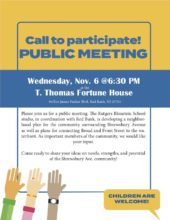 That’s when eight urban planning students from Rutgers will visit to solicit input for two theoretical makeovers in town: one centered on Shrewsbury, and one that envisions a long-sought Broad-to-the-River project.

“We’re looking to get input on what community members think,” student Kate O’Rourke told redbankgreen. “What kind of changes they’d like to see.”

All eight students are second-year graduate students at the state university’s Bloustein School of Planning and Public Policy. They’re participating in a design studio led by planners Susan Gruel and Fred Heyer, whose firm, Heyer Gruel & Associates, is based on Broad Street.

“We’re looking to get input on what community members think,” student Kate O’Rourke told redbankgreen. “What kind of changes they’d like to see.”

The students have already held meetings with borough officials, including Planner Glenn Carter, as well as some other stakeholders, she said. They’ve also been tasked with getting word out and with leading the session, to get their feet wet in dealing with the public.

While the effort “is mostly about Shrewsbury Avenue,” ideas for Broad-to-the-River will also be solicited, she said.

Why take on two major challenges at once, rather than focus on one?

Gruel and Heyer “have high aspirations for us,” but handling the dual assignments is “certainly doable,” said O’Rourke. “We’ll do our best to honor both areas.”

Last December, undergrads from the Bloustein program presented ideas for transforming Monmouth Street in the area of the train station.