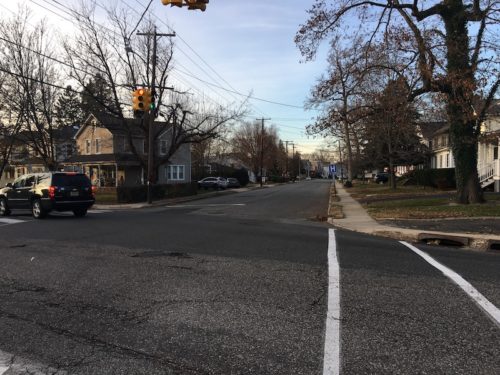 The cost of road rehabilitation work on Spring Street will be partially covered by a state grant. (Photo by John T. Ward. Click to enlarge.)

Red Bank will get some of the $161.25 million in Municipal Aid Grants to be doled out for 2020 by the administration of Governor Phil Murphy, his office announced last week.

Other towns on the Greater Red Bank Green will also get slices of the pie.

Under the New Jersey Department of Transportation’s Commitment to Communities initiative, towns throughout the state will receive grants to advance road, bridge, safety and quality-of-life improvements.

Red Bank is to receive a $215,000 grant for roadwork on Spring Street, from East Front Street to Ambassador Drive, according to a Friday posting on the borough website.

The total cost of the resurfacing project is estimated at $1.1 million, and will include milling and paving, concrete work for certain sidewalks, driveways, and curbs, and stormwater run-off drainage improvements, the announcement said.

The project will be scheduled is part of the 2020-2021 road improvement program, the announcement said.

Since 2018, the borough has pulled in approximately $1.78 million in grants from various sources.

Other towns on the Greater Red Bank Green are also in line for the municipal aid grants. Among the grants and designated projects on the list are:

All were listed as “roadway preservation” work except for Rumson, which was identified as a “pedestrian safety” project.

“Our administration sought to deliver a fairer approach to how government does business and this round of grants will, in the third straight year, reach more municipalities than in the previous fiscal year,” Murphy said in the announcement.

In addition, the DOT accelerated the fiscal year 2020 Municipal Aid grant cycle so the awards could be made months earlier than in years past, which will help  municipalities better plan infrastructure projects, the announcement said.