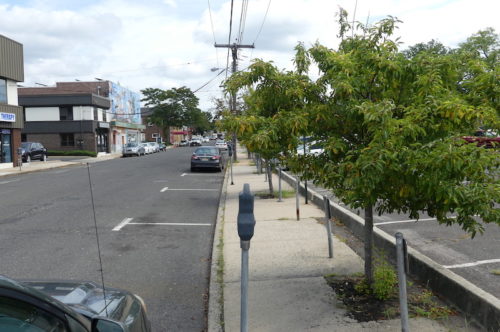 The sidewalk along the south side of White Street would be removed to allow for angled parking on that side. (Photo by John T. Ward. Click to enlarge.)

As Red Bank officials get ready to remake a downtown block for angled parking, they’re asking the public for input on additional aspects of the plan.

A concept plan shows new angled parking and a new mid-block pedestrian crossing, though its location is still up for discussion. (Image by CME Associates. Click to enlarge.)

The borough council has scheduled an “input session” for next week to solicit ideas for the planned White Street paving and streetscaping project, running from Maple Avenue east to English Plaza.

The project dovetails with, but is separate from, a streetscape project completed last year by Red Bank RiverCenter. That one included a makeover to the English Plaza parking lot, a new pedestrian walkway connecting Monmouth and West Front streets and other elements.

The current plan calls for removing the sidewalk along the northern edge of the White Street municipal lot in order to widen the street by several feet.

The change will enable the creation of 22 angled parking slots, he said.

The input session is being held “to explain the scope of the project and construction, so people know what to expect, and to get feedback on the trees, lighting” and other elements, Shehady said.

That includes the question of where to locate a planned mid-block pedestrian crossing to link the parking lot with the north side of the street, which will retain its sidewalk, he said.

Shehady said he, along with consulting Engineer Laura Neumann of CME Associates and public utilities Director Cliff Keen, will review the new project design. They also provide an overview of the construction timetable and ask for input from residents, business owners and other who attend.

The project is being funded in part by a 2018 New Jersey Department of Transportation grant of $350,000 toward a total estimated cost of $1.5 million, Shehady said in August.

The streetscape project does not include the 273-space White Street lot itself. That 2.3-acre site was the focus of a drive for a parking deck and other development under a brief period when Republicans held a council majority. But the effort collapsed when Democrats, who opposed the garage plan, regained control in 2017.

Shehady said a parking deck is not out of the question for the site. But this month, he said, he plans to solicit proposals from engineering firms addressing the totality of the downtown’s parking inventory, both east and west of Broad Street, as well as Marine Park, as recommended by a parking study unveiled 13 months ago.

If the garage effort ever restarts, “that’s a five-year process,” and the borough “can’t not do anything” to improve the existing lots in the interim, Shehady said.

The meeting is scheduled for 5:30 p.m. Thursday, February 13, at borough hall, 90 Monmouth Street.