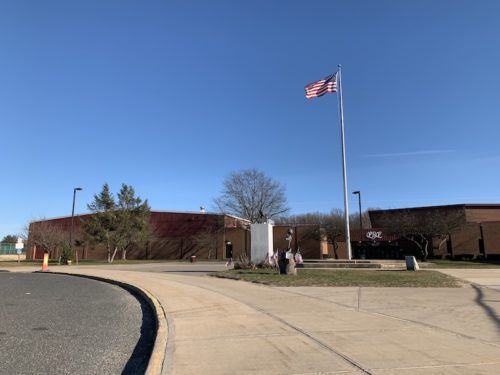 The school will take a day to give the facility a “deep cleaning,” the superintendent announced. (Photo by John T. Ward. Click to enlarge.)

Red Bank Regional High will be closed Tuesday because of a student’s connection to a Little Silver man reported to be infected with the COVID-19 coronavirus, Superintendent Lou Moore announced Monday.

In a posting on the RBR website late in the afternoon, Moore said one of RBR’s students is a sibling of the 27-year-old man reported to be presumptively infected with the virus.

“At the present time, no one else in the family has been tested for the virus,” Moore wrote.

“As a precautionary measure, RBR will be closed tomorrow, 3/10/2020, so the custodial staff can perform additional deep cleaning of the building,” he wrote. “This will also give health officials time to evaluate the situation and provide us with further direction. We will be sending out additional information when it becomes available.”

“Our staff will be developing contingency plans to ensure continuity of our instructional program in the event of an extended school closing,” the statement continued.

Moore advised students to stay home from school if they are sick or have been “fever free” for less than 24 hours.

“Although these developments are concerning, we should not act out of fearWe should all continue to take common-sense precautions to minimize any risk,” he wrote.

Earlier in the day, Monmouth County Freeholder director Tom Arnone and deputy director Susan Kiley announced that the county had learned of two presumptive cases of the virus in Monmouth County: the Little Silver man, who they said was being treated at Hackensack Meridian Health Riverview Medical Center, in Red Bank; and an 83-year-old female being treated at Hackensack Meridian Health Bayshore Medical Center in Hazlet.

Both patients were “hospitalized and in stable condition,” the freeholders announced.

But according to a post shortly before 5 p.m. by Mayor Bob Neff on the borough’s Facebook page, “this resident has been self quarantined since March 1st and appears to be recovering at home.”

Monmouth County spokeswoman Tricia Wajda told redbankgreen via email that the county “can’t confirm the patient being discharged” and said that information would have to come from Riverview. A hospital spokesperson did not respond to a request for an update.

In addition to RBR’s closing, Neff said that residents with school-age children “will be receiving information from both the elementary and high school. The Borough, working closely with the Regional Health Commission will provide any new information as it becomes available.”

Meantime, borough rec department sports have been cancelled “pending results of further testing and investigation by the state,” he said.

According to the Boston Business Journal, approximately 26 employees at the pharmaceutical company Biogen who attended a company meeting in Boston late last month have tested positive for the virus.

All but three were said to be Massachusetts residents.

About 175 people were at the meeting, held at the Boston Marriott Long Wharf at the end of February, the company told the BBJ.

Meantime, Red Bank’s borough government said there’s “no reason” to deviate from its normal operations in light of COVID-19 concerns. “Municipal offices remain open and regularly scheduled meetings will continue to be held,” it said in an announcement on the borough website.