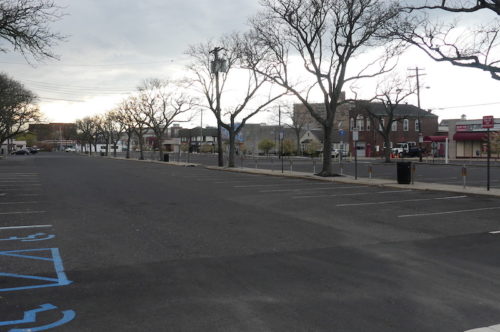 Along with their Netflix and Hulu viewing options during the COVID-19 lockdown, civic-minded Red Bankers will have some Zoom options in coming days.

Among them: a presentation on the redesign of the White Street parking lot. 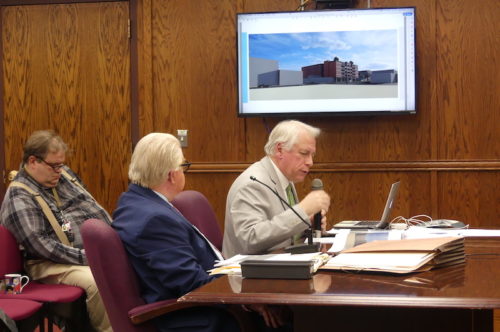 Architect Mike Simpson testifying at a zoning board hearing on a proposed apartment project in February. (Photo by John T. Ward. Click to enlarge.)

Here’s a look-ahead at upcoming meetings, in chronological order, plus an update on some others that are still on pause.

• The borough council plans to hold a special meeting Friday (today) for the sole purposed of considering whether to extend the deadline for property tax payments from May 1 to June 1.

Under an executive order signed Tuesday by Governor Phil Murphy, municipalities were given the power to push back the deadlines, which can only be changed by the state, to help ease financial burdens on property owners who make direct tax payments, rather than through a mortgage escrow.

Taxpayers normally have a 10-day grace period to avoid interest and penalties. If adopted, the grace period would be extended to June 1.

The session is scheduled for 3 p.m. Information on viewing and listening options can be found here. (Fair Haven also plans to hold a special session for the same purpose at 4 p.m. More information is here.)

• Next Tuesday, May 5, borough Business Administrator Ziad Shehady, joined by engineering consultant Laura Neumann of CME Associates and public works Director Cliff Keen, will conduct an information session on planned changes to the White Street parking lot in the center of downtown.

The project, to be done in coordination with a streetscape makeover of the western portion of White Street itself, calls for reconfiguring the traffic flow pattern with the lot, and could add some spaces to the 273-spot facility, officials have said in the past. For more on the project, see this redbankgreen article.

Shehady told redbankgreen via email this week that the presentation will include “an updated concept drawing of the parking lot improvements to get feedback on.”

Last week, the council awarded a $975,975 contract to Lima Charlie of Freehold for the streetscape. The bid was the lowest of six, and nearly $207,000 below the next-lowest, submitted by James Lentile Inc. of Marlboro, according to the resolution authorizing the agreement. [Correction: redbankgreen previously reported the contract also covered the parking lot work, which was wrong.]

The session is scheduled to begin at 4:30 p.m. and last about an hour. Information on viewing and listening options can be found here.

• The next “public” council meeting will be the third conducted via Zoom and Facebook Live, and is scheduled for Wednesday, May 13 at 6:30 p.m.

The agenda is not yet published.

• No planning board or zoning board meetings have been held since the COVID-19 crisis began, and no firm plans have yet been made to hold any, Shehady said

By law, board hearings on development applications must be open to the public. But they’re more involved than council meetings, because land use boards “are quasi-judicial [and] require exhibits, sworn testimony, etc.” Shehady said. “The decision to postpone the meetings for April and May is based on legal guidance, and we’re evaluating and reviewing the steady stream of guidance from the State.”

Shehady told redbankgreen that officials “have all options under consideration, but we’re moving carefully and cautiously to ensure the public interest is protected and the due process rights of applicants is also preserved.”

• The Redevelopment Agency hasn’t met since January 28, when it held a session that lasted just 11 minutes.

Several commissioned reports that were pending have since been completed, but aren’t yet publicly available because “they’re still in the draft/deliberative format,” Shehady told redbankgreen

“The professionals have made significant progress with respect to conceptual drawings, but they’re still meeting with folks to further refine and adjust,” he wrote.

So when’s the next session?

“We’re weighing the necessity of a meeting on a monthly basis and whether the public would be best served by the consideration of agenda items with an electronic meeting or an in-person meeting that should wait until restrictions allow,” he wrote. “Likely by mid-May a determination will be made about that monthly meeting.”