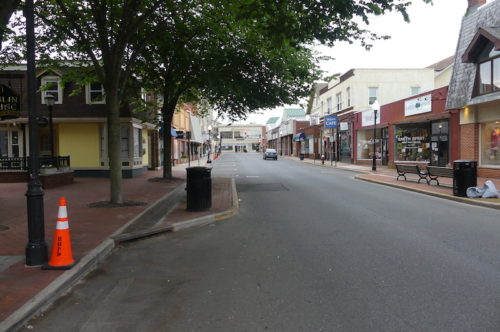 Monmouth Street between Broad Street and Maple Avenue would become a pedestrian plaza all day on Sundays as part of a recovery plan. (Photo by John T. Ward. Click to enlarge.)

On a Zoom/conference call with merchants, borough officials said they need information from Governor Phil Murphy on key issues before they can finalize plans for allotting sidewalk and street space among restaurants, retailers and others. 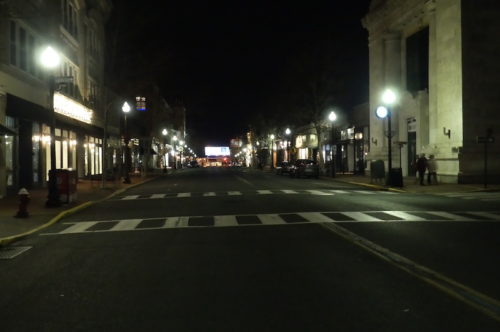 Broad Street, all but vacant at night throughout the crisis, would become a dining and shopping plaza three nights a week under the borough restart plan. Below, state Senator Vin Gopal was critical of the Murphy Administration’s attention to small business. (Photo by John T. Ward. Click to enlarge.)

Among them: whether patrons of bars can enjoy their beverages in the street.

“We definitely have some details we need to work out,” said Councilwoman Kate Triggiano, a member of an ad hoc committee formed last month to explore creation of pedestrian plazas as a way to jumpstart the town’s recovery.

The borough council approved the plan in the form of a resolution last Wednesday.

The next step, said borough Business Administrator Ziad Shehady, “is to be ready for June 15,” when additional COVID-19 restrictions imposed by Murphy in March are expected to be lifted.

Shehady said the committee, which is slated to meet Wednesday, is working out “public safety parameters” to accommodate police, fire and public utilities access to the affected areas.

The committee will then use that information to begin “dividing up” sidewalks and streets for use by individual businesses, Shehady said. Not every business will have access to the area directly out front, he said.

Shehady said an application was being finalized, similar to the one used by restaurants to seek approval for sidewalk cafés, that would require borough approval.

Businesses that are located outside but close to the closure zone “can hop on” to benefit from the street closures, he said, though he didn’t specify limits on this.

Questions during a Q&A included how many tables and how many seats each restaurant would be allowed.

Mayor Pasquale Menna said it would be “premature” to answer the question.

Likewise, he told Patrizia’s restaurant owner Giacomo Alaio, it was unknown if restaurants that are now permitted to sell wine will be able to serve it in the street.

“That’s an issue to be decided” by the the New Jersey Division of Alcohol and Beverage Control, Menna said.

State Senator Vin Gopal, who was on the conference call with state Senate President Steve Sweeney, said he expected whatever license is held by a restaurant or bar to be extended outdoors.

Restaurants that lack a license “obviously won’t be able to serve outside,” he said. “That’s how I think the ABC is going to interpret it.”

A caller representing AR Workshop, a DIY craft shop on Broad Street, urged officials not to forget the needs of businesses that are neither retail nor dining.

In the same vein, Wendy Jones, owner of A Time to Kiln on Broad Street, sought assurance she would have outdoor table space for her clients to make crafts.

Rob Amend, owner of Red Ginger, a furniture store, expressed concern that retailers, who “haven’t even been allowed to do curbside for the past 12 weeks,” seemed to be getting overlooked at the expense of restaurants.

“We need all this stuff just as much as everybody else,” he said.

Triggiano assured him that retail was a committee priority, but that restaurants got more discussion because of the challenge of  “building the airplane in the air” while awaiting ABC guidance on alcohol sales, she said.

“There’s a really hard puzzle there that we don’t have with the retail aspect,” she said.

Gopal criticized the Murphy Administration’s response to the needs of small businesses, which he said can be responsibly be reopened.

“Not to throw the administration under the bus,” said Gopal, who like Murphy, is a Democrat. “But the lack of clarity is really disgraceful.”

Sweeney and Gopal praised Murphy for leading an effort that flattened the curve of COVID-19 infections, but pressed him to reopen small business quickly.

“It is now time to get our people back to work,” Sweeney said. “Every day that we stay shut down is one more day that we’re putting a nail in the coffin of the small business owner.”

Both acknowledged that “flare-ups” of COVID-19 are likely as businesses restart.

“But that’s why we have hospitals,” said Gopal. “I hate to sound callous, but we can’t just sit here being scared,” he said.

“There’s a responsible way to open,” with people wearing masks and maintaining six-foot separations, Gopal said. “The alternative of saying we just have to be shut down until there’s a vaccine or whatever the solution is is just not acceptable.”