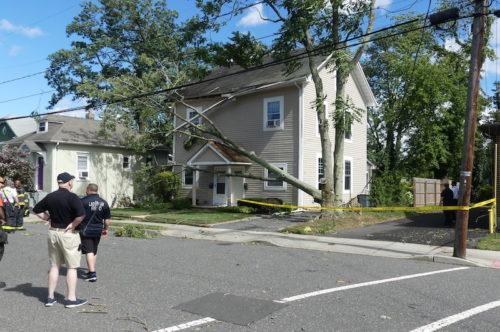 Tropical Storm Isais brought down a tree and electrical wires onto a house on Mechanic Street in Red Bank Tuesday. No one was injured, police said.

The storm swept through the Greater Red Bank Green by mid-afternoon, leaving behind numerous power outages, lots of leafy debris – and bright sunshine. 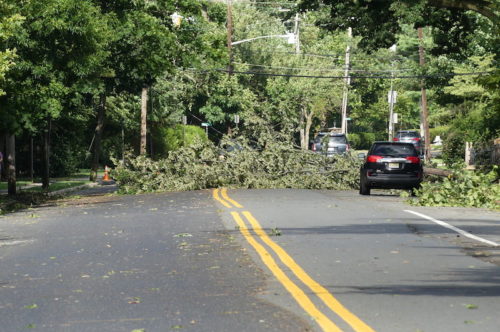 Fallen trees forced the closure of a stretch of Sycamore Avenue in Shrewsbury, above, and Little Silver Point Road in Little Silver, below. (Photos by John T. Ward. Click to enlarge.)

JCP&L’s outage map showed a whopping 69 percent of its 291,000 Monmouth County customers affected by outages as of 5:15 p.m.

In Fair Haven, Chief Joe McGovern reported that as of 5:10 p.m., most of the borough was without electricity.

In addition, River Road was closed at Buena Vista Avenue because of a downed tree, one of about five large trees felled and impacting service in town, McGovern told redbankgreen.

On a quick tour of the Green in late afternoon, redbankgreen encountered the following:

• The traffic signal at Fair Haven Road and Harding Road knocked out of service.

• The traffic signal at Sycamore Avenue and Broad Street (Route 35) in Shrewsbury out of service.

• Traffic on northbound Broad Street in Shrewsbury being detoured through the Grove shopping center around an unknown obstruction.

• A large branch broken off a tree and suspended by wires on Rosslyn Court in Little Silver.