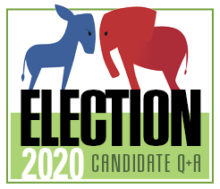 Neither of the two incumbents seeking re-election as Red Bank council members responded to questions sent to them by redbankgreen last week.

Though both candidates have completed the customary Q&As in the past, neither replied to emails from redbankgreen about their intention to complete the questionnaire, sent Friday. redbankgreen will publish them if received.

Because of both the COVID-19 pandemic and the absence of opposition in the election, the annual West Side Community Group candidate’s night was not be held this year.

An investigation that Zipprich and Ballard have been calling for, to determine the source of emails leaked to redbankgreen in August, was not on the meeting agenda.

A competing demand, by at least two of the other four Democrats on the governing body, for an investigation into Zipprich’s communications with a prospective bidder while bidding for the borough’s trash contract was pending, was also not on the agenda. Nor was a prospective solution to the standoff over the dispute, which went unmentioned in the 30-minute public meeting.

Posted on October 29, 2020 at 7:00 am, filed under Featured, Government, Parking, Politics, RED BANK, Taxes and tagged 2020, council, ed zipprich, election, michael ballard, nj, Parking, Q&A, red bank, Taxes. Bookmark the permalink. Follow any comments here with the RSS feed for this post. Trackbacks are closed, but you can post a comment. Email this story.
PREVIOUS: RED BANK: HEAVY RAIN IN FORECAST NEXT: RED BANK: CONCERT OFF, LIGHT-UP STILL ON