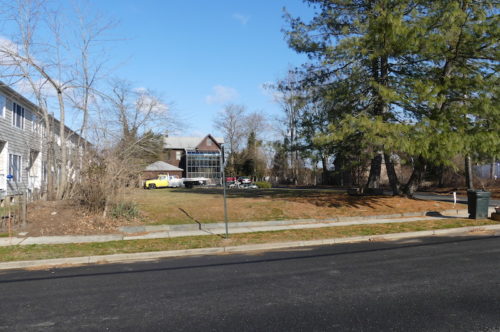 At issue was a proposal to carve out a 43-by-100-foot lot from the long and narrow lot, where a 19th-century structure serves as a four-family overlooking the upper Navesink River.

The proposal was submitted a year ago by a limited liability company whose members are Lonnie Gordon, who has a residence in the existing house; and her son, Stephen Houck, who lives two doors to the east.

In 2018, Houck and his wife, Melissa,  won approval from the same board to divide their primary residence, at 60 Locust Avenue, in three. They subsequently built two new homes at the street end. A “mirror image” of one would be built on the proposed lot.

That lot needs a variance because its frontage is seven feet short of the minimum required in the zone. Applicant’s attorney Rick Brodsky argued that the majority of single-family homes on Locust Avenue also don’t comply.

“That is certainly consistent with the neighborhood,” he said.

The new house would be sited alongside the Bellhaven Commons townhouse complex. All of the public opposition voiced at the hearing came from Bellhaven residents and their attorney, Dan Himelman.

They contended the new house would be too close to the back decks of their units, blocking light and views. It would also cause drainage problems affecting them, they said.

Other variances necessary to the proposal all have to do with the existing house, said applicant’s planner Gordon Gemma. Yet none of them affect neighboring properties, he said.

“I don’t care what you say, it’s intensifying the use of the property,” Himelman said. “And that house that’s going up is very close, and will impact at least five units.”

The proposal sparked little passion in board members. There was silence when Chairwoman Lauren Nicosia asked for a motion to approve or reject. So she made her own motion to reject, arguing, “I still think this is a little too dense for that property.”

The motion failed on a 4-2 vote, with member Ray Mass abstaining, saying  he was “torn.”

“This is the first time in 14-plus years that I haven’t been able to make a decision,” he said “I’m just not comfortable” deciding either way, he said.

Board member Sean Murphy eventually moved to approve the plan, but withdrew the motion after floating a suggestion that the  attorneys for the two sides agreed to: that the developers and the opponents meet and try to find middle ground.

In addition, Brodsky said he would come back with a drainage plan and a landscaping plan at the hearing’s resumption, scheduled for April 1.