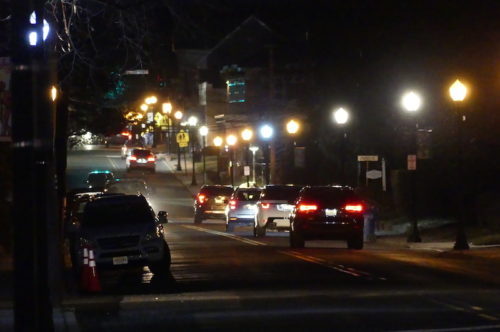 An easterly view along River Road from Cedar Street earlier this week. (Photo by John T. Ward. Click to enlarge)

That prompted some choice words about the utility from commission member and former councilman Jon Peters. Among them: “They are the princes and princesses of darkness.” 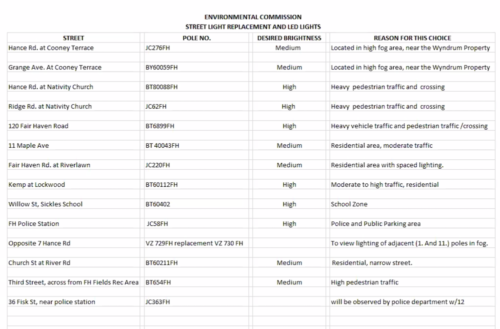 An Environmental Commission document from November listed the suggested locations for test lamps. Below, Jon Peters in 2016. (Click to enlarge.) New lamps were to have been installed for a field trial to determine how to improve street lighting quality while reducing municipal electricity consumption and costs, Wyndrum told the borough council November 9.

The 49 or 50 incandescent lamps spread around town are a “tremendous waste” of energy and money, he said.

The trial called for a dozen energy-efficient LED lamps to be installed at locations exhibiting different conditions, from low-traffic residential areas to busy commercial areas, as well as schools and churches, said Wyndrum, a retired engineer and past president of IEEE-USA.

“We will be trying different lamp wattages to see what public reaction we get,” Wyndrum told redbankgreen. Residents would be asked to weigh in on the changes in light quality, and once new lighting levels were determined, all the incandescent lamps in town would be upgraded to LED, he said.

Jersey Central Power & Light, owned by power giant First Energy, had agreed not to charge for installing the lamps, he said.

But just 10 weeks later, the utility appears to be backing out of the deal, Wyndrum told the commission Wednesday night at its monthly meeting, conducted via Zoom.

“We were all set to put them in, and the borough had gotten an agreement with Jersey Central Power & Light to do so,” Wyndrum said. But then, the utility “decided to apply for a new tariff [rate schedule] for street lights, and if they did that, it might be that the new tariff would not include putting in 12 free ones as a new-technology boost. I was very disappointed.”

Wyndrum said a JCP&L representative told him the program is part of a business unit “with the least return.”

According to the utility, “they pulled the old tariff, so they can’t do it,” Wyndrum said.

That set Peters sparking like a downed live wire.

“They’re a rate-regulated monopoly. They should do their job, and we shouldn’t pull any punches with them, because they have been a terrible provider of service,” Peters said. “They are the princes and princesses of darkness.”

He went on: “The fact that they have a tariff that requires them to do this – what they’re trying to do with their business model I don’t care. They have to do what the tariff says because they’re a regulated monopoly.”

Peters, an economist who specializes in public finance, said the explanation Wyndrum had received “looks like a lie to me. The government doesn’t let you ‘pull the tariff.’ They put a new one in place.”

“The tariff is approved by the public utility commission,” said commission alternate Greg Wright, referring to the New Jersey Board of Public Utilities.

“And there’s one in place,” Peters said.

“On the other hand, we have to get them to want to do it,” Wyndrum said.

“I believe that you make them do it,” said Peters. “Because they’re not going to want to do it. As you said, they don’t make any money on this, so the last thing they want is to do this. So make it unpleasant enough for them that they don’t want to do something else.”

“They don’t do much without being compelled,” Peters said. “All they’ve ever done is be obstructive in my 15 years of experience with them. Never been helpful.”

Afterward, Wyndrum told redbankgreen that he hoped to speak to JCP&L officials in coming days “to find the present status” of the project.

[UPDATE: Wyndrum told redbankgreen that JCP&L informed him Friday morning that “the new tariffs are in place and we can expect to go ahead with the project.” UPDATE 2: JCP&L spokesman Mark Durbin said Friday afternoon that Wyndrum “has indicated a willingness to wait on this project” until the return of company representative Frank Luna, a National Guard member who was called up to Washington DC earlier this month and is expected back in New Jersey in a few weeks.]

In recent years, the borough has been hit with multiple widespread power outages, including one that affected every customer in town for days after Tropical Storm Isaias last August.

Three months later, a JCP&L representative addressed the council about that outage and others; here are the meeting minutes, and here’s a report he shared: Fair Haven Outages 2019_2020