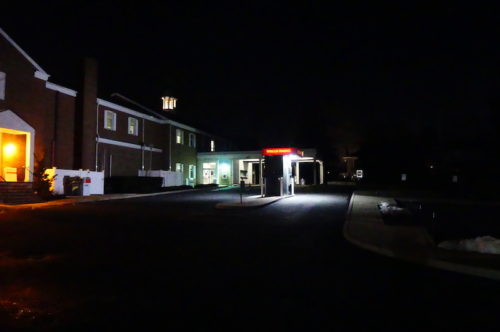 The bank agreed to remove the lights behind the red logo atop its ATM machine, but said the site overall was inadequately lit under state regulations. (Photo by John T. Ward. Click to enlarge.)

Wells Fargo dodged likely planning board rejection when it agreed to dial back an illumination plan for its Red Bank branch Monday night.

The fact that the property is under review as a possible new home for borough government also lit up the conversation. 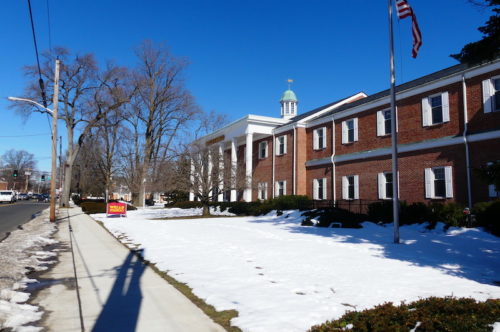 A daytime view of the Broad Street side of the bank site. (Photo by John T. Ward. Click to enlarge.)

The 3.5-acre property at 303 Broad Street wraps around three homes on  East Bergen Place in a rough horseshoe shape. It’s owned by Grace Aquisitions [sic] NJ LLC, based in Lakewood, and leased to the bank.

A new lighting plan was needed because the bank does not meet state regulations for security lighting, bank project manager Kyle Kavinski testified.

No explanation was offered for how long that’s been the case. The building was erected as a banking operation in 1965 and has been home to a succession of industry players since then.

Thea Jandzio, who’s lived next to the bank for 16 years, said no one from Wells Fargo had mentioned the regulatory shortcoming at any of three prior hearings on the plan, “so now I’m kind of surprised,” she said. “That I would have thought would have been brought up at the beginning.”

To address a complaint from neighbors, the bank agreed to stop illuminating its own name in a red band around the top of a free-standing ATM island. But lighting within 50 feet of the machine must remain on all night, Kavinski said.

Of greatest concern to board members was a plan to install 24 new 16-foot tall LED lamp poles in the bank’s parking lot, replacing 16 9-foot-tall lantern-style fixtures. The lighting is needed because the building’s second-floor offices are used as late as 10 p.m., a bank official said.

“So there will be 20 lights left on all night long?” asked member Barbara Boas. “I have one streetlight outside my bedroom window. It’s a Red Bank streetlight, so you know it doesn’t give off a lot of light but it can be annoying. This seems like overkill to me.”

“It’s a lot of lights,” said member David Cassidy. The lamps were intended for shopping centers, he said, “and we’re putting them into a residential zone.”

“At the end of the say, the issue is light spillage,” said fire marshal and board member Tommy Welsh. With proper shielding, the light would be directed downward, minimizing spillage, he said.

Hudson Avenue resident Ross Richardson said his biggest concern, too, was the parking lot lighting. He praised Wells Fargo for making “a conscientious effort” to address the neighbors’ concerns.

The board approved the plan on a 6-3 vote.

The bank’s plan also called for planting a double-row of fast-growing Green Giant Arborvitae evergreens to form a dense light screen along part of the border with the homes.

The possibility that the property might someday become home to borough government also generated some buzz during the Zoom meeting while Lario consulted with his clients.

As reported by redbankgreen last week, the Redevelopment Agency authorized an architect to “do a concept design” to see if the site can accommodate  borough offices, the police department and municipal court.

“If this is going to be the borough hall, why would they need all that” lighting, quipped board attorney Michael Leckstein.

“You’re not the borough counsel,” Cassidy jumped in as several people spoke at once.

“Why are we worried about the ATM? It’ll be gone,” Leckstein continued.

“How real is that with borough hall?” said board vice chairman and former council member Art Murphy. “It’s like the second time I’ve heard that. I’m like, really? I never knew that.”