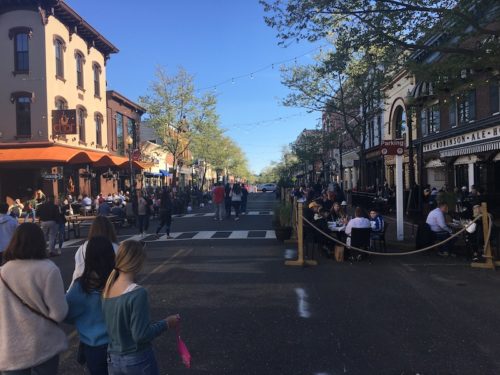 With the second season of Red Bank’s Broadwalk about to begin in earnest – weather permitting – downtown merchants say the pedestrian dining and shopping concept is doing what it’s intended to do: improving their receipts. 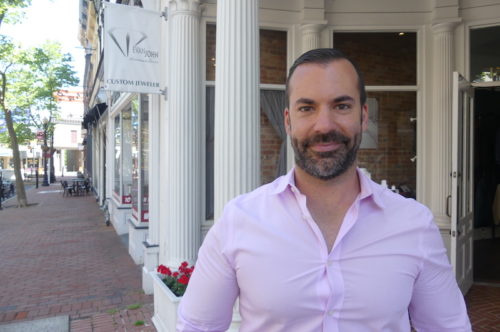 The traffic-free zone at the northern end of Broad Street returned for its sophomore year a month ago, getting a two-month jump on its frantic 2020 debut amid the raging COVID-19 pandemic.

Now, with the Memorial Day weekend signaling the start of summer just as pandemic health restrictions are being eased, merchants and restaurant owners both within and outside the zone say they hope to build on a foundation laid during the project’s freshman year.

“I think Broadwalk was very important to the business community, particularly those of us on the Broad Street section that was closed to traffic,” said Evan Piscitelli, owner of Evan John Diamantaire. “It brought a lot more people into town, and allowed us to stay open later and service our customers better.

“That really did save us,” he said, noting that most businesses had been fully closed for the preceding three months. “So getting that excitement back into Red Bank was important.”

Most business owners contacted by redbankgreen said they were pleased with the Broadwalk concept.

“A lot of people park in [English] plaza, and from there they go to lunch/dinner, go to shops (whatever is left) or for a stroll around town, and then sometimes when they get back to their car they discover my shop,” she said via email. “People are happy to find my shop, since there are literally not a whole lot of shops left in Red Bank. So that’s great for me.”

Emily Natale called Broadwalk a “really cool concept” that has benefitted her, even though her Pearl Street Consignment shop is two long blocks away on Monmouth Street. She credits a fashion show she was allowed to host on Broadwalk last summer with giving her shop a boost.

Elsewhere on the outer margins of the Broadwalk zone proper, the borough council last year relaxed rules to allow streateries on West Front, White and Monmouth streets, as well as Wallace Place and Broad Street south of the closure zone. The table enclosures enable simultaneous vehicular traffic and curbside dining.

Councilman Hazim Yassin, who serves as the council liaison to the business community, said Broadwalk’s second year has been a “massive success so far.”

In addition to hearing positive feedback from those within the zone, he’d had “a lot of conversations with businesses outside of the plaza, and they’ve seen revenue increases as well, just from increased traffic into town,” he said at Wednesday’s council meeting.

Not everyone is so sanguine, of course. Two restaurateurs, one just steps away from the action, told redbankgreen that Broadwalk is hurting their businesses.

Steve DeAngelo, the one-man band at Soul Sandwich, in a mews off Monmouth Street, said slowed traffic caused by the Broad Street closure scares off customers who used to come into town to grab a sandwich and go.

Add to that what he calls “the town’s propensity to issue parking tickets,” and would-be customers stay away, especially from shops that depend on quick sales, DeAngelo said.

“They don’t want to make the effort,” he said. “I’m all for helping everybody, but it is definitely detrimental to those of us who aren’t in the zone – not because it takes customers away, but because of the traffic and parking issues.”

Yassin rebutted those complaints. He said the large number of customers drawn to Broadwalk is proof in itself that traffic and parking are not deterrents.

“I get it,” said  Yarusi, owner of Johnny’s Pork Roll and Coffee, on Monmouth Street. “Parking is a real hinderance. So it does kind of hurt me to some degree.

“Look, I could complain: I’m losing parking spaces,” he said, pointing to a streatery set up outside Mr. Pizza Slice next door. “But it helps these guys make a little extra money and recover, and I’m happy with that.”

The upside is that widespread media coverage about Broadwalk is “without a doubt” bringing in more visitors from northern New Jersey and Staten Island, said Yarusi.

“I liked it last year, and I love it this year,” he said. “I just think it adds another element that brings in foot traffic and makes it a unique place to come to.”

Another restaurateur located outside the zone detailed multiple complaints to redbankgreen about Broadwalk, as well as what he said was a lack of response by borough officials, including Yassin. But as this article was being prepared, the restaurant owner asked to withdraw his name and comments, citing a concern about being drawn into town politics.

“Apparently, it’s benefitting the town, and I can’t be the reason to destroy it,” he said via email.

Forge owner Montaperto and others worry that, with a plethora of downtown store vacancies, the district cannot properly capitalize on the crowds being drawn in to dine on Broadwalk.

“Broad Street is a sad, sad sight. It is not the Red Bank I once knew. One empty store front after another,” she wrote. “What I’m hearing from my customers is that there isn’t much for them to do in Red Bank, other that eating out at restaurants.”

Piscitelli, though, is hoping the district can leverage what he sees as a shift in psychology about prompted by Broadwalk and the attention it generated.

Last year, “people came here as a destination for the first time in a while,” he said. Whereas in the past, would-be visitors might have been dissuaded by the prospect of parking and walking, the concept of Red Bank as a “destination made it a little more enticing” to have to stroll a bit, he said.

“This year, we’re starting to see that again. People are once again seeing Red Bank as a destination,” he said. “It’s a whole different mindset now, and I think that’s going to be a net positive.”