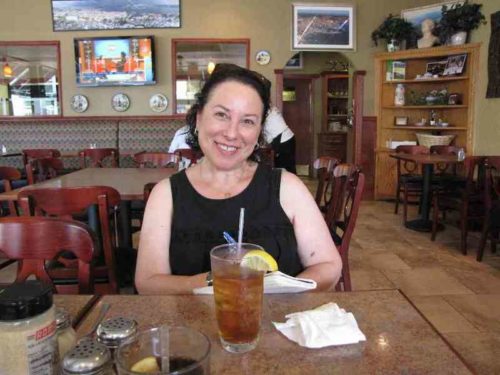 Food writer Susan Ericson of Red Bank died Friday at home under hospice care after a lengthy illness. She was 66 years old. 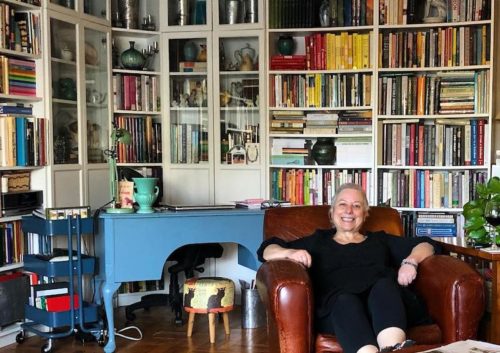 Susan Ericson at home in 2020 with some of her cookbooks. (Photo by Jenna Reed. Click to enlarge.)

Born into a bakery-owning family in Freeport, New York, Ericson blogged about food and cookbooks, of which she owned a large collection. For three years starting in 2014, she wrote weekly for redbankgreen‘s now-dormant PieHole food page.

She embraced the local food scene, reviewing lunch offerings, promoting young chefs and offering gentle critiques where needed. From farmers’ market to table, from breakfast through late-night snacks, she was attuned to gastronomic delights.

In a 2017 post about her first encounter with the now-gone Luigi’s Ice Cream shop in Red Bank, she wrote:

There’s a subtle, honey-scented air about the place that seems to elicit smiles from everyone walking by. If heaven has an aroma, this is how it will smell.

Just days before her death, she posted from a hospital bed at Riverview Medical Center:

“Let’s talk about hospital food and what a bad rap it gets. I have advice, don’t order the special of the day. Chances are it will be mushy and over processed but if you get to know your other options such as the vegetarian menu, a whole world of tastiness will appear.”

Along with her comments was an overhead photo of a Greek salad with grilled chicken, and another showing a bag of popcorn.

Ericson was the daughter and granddaughter of bakers, and worked in her family’s bakery as a child. After a series of jobs in Manhattan, she and her husband, Bruce settled in Fair Haven in 1990. There, they raised three children and maintained a plot at the community garden. Susan also briefly owned a kitchen collectibles shop called Black Eyed Susan’s Kitchen.

As empty-nesters, the Ericsons moved to the Colony House apartments in Red Bank in 2017, bringing with them cookbooks that filled floor-to-ceiling bookshelves. Along with her husband and two of their children, Susan was a regular in the Trivia Night contests at Jamian’s Food and Drink on Monmouth Street.

In addition to her husband of 42 years, Ericson is survived by her children: Karissa Kudile and her husband, Jeff; Jenna Reed and her husband, Kyle; and Brian Ericson and his wife, Kelsey Kazmac. Also among her survivors are her parents, Sanford and Temmie Drucker; siblings Glen, Mark and Lynn; and two grandchildren.

A graveside service and burial will be held at 11 a.m. Tuesday at Baron Hirsch Cemetery in Staten Island. In lieu of flowers, contributions in Susan’s memory may be made to the American Cancer Society.

An obituary can be found here.