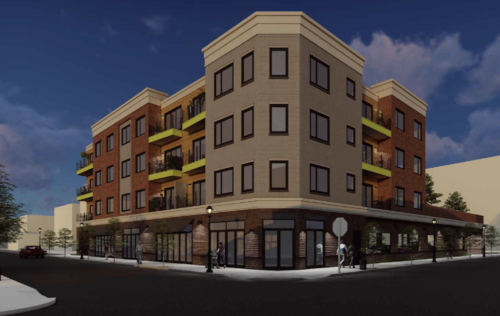 The plan now calls for five affordable units at 120 Monmouth Street, up one, among the 32 proposed. (Image by S.O.M.E. Architects. Click to enlarge.)

After a three-month break, a plan for new apartments on Monmouth Street in Red Bank may get an up-or-down vote Thursday night.

Also on the zoning board agenda: a small expansion of the Parker Family Health Center. 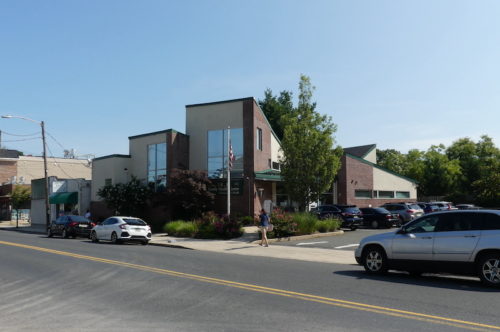 • Continuation of the hearing on a proposal by Park Valley Development to erect 32 apartments and street-level retail at 120 Monmouth Street, at the northwest corner of Pearl Street.

Since the last session on the plan, on May 6, the proposal has been modified with “mostly technical” revisions, architect Mike Simpson, of SOME Architects, told redbankgreen.

They include the addition of a three-bedroom affordable unit on the second floor, a change that reduces the rooftop green area “a little,” said Simpson.

The change would appear to address the foremost objection to the plan raised by board members. The developer is obligated to provide five affordable units, but had originally proposed making one of them off-site.

The project provides its own parking lot beneath three floors of residential units, with access via a single driveway, on Pearl Street, and does not need a parking variance. A roll-up garage gate has been relocated further inside to allow a vehicle to be off the street if the grating is slow to open, Simpson said.

The plan now calls four four electric vehicle charging stations, one of them barrier-free. The original filing had none.

The site is a vacant gas station last used as a gym.

• The Parker Family Health Center, at 211 Shrewsbury Avenue, is expected to go before the board for a planned 1,328-square-foot addition to its ground floor.

Because a medical center is not permitted in the residential/business zone in which the center is located, variances are needed.

The addition, to contain offices, consultation rooms and a multipurpose room, would be set back from the street and abut the parking lot for the River Street Commons senior living facility next door, according to plans on file with the borough.

Here’s the full agenda. The board meets at 6:30 p.m. via Zoom; information about viewing and participating can be found here.