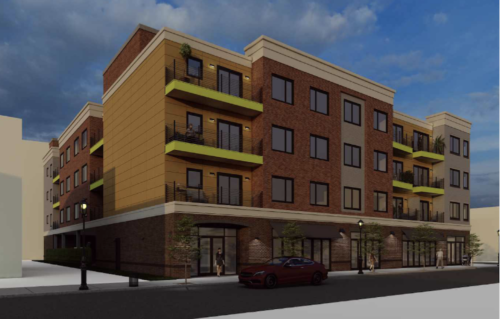 A rendering of the Monmouth Street side of the project, with Pearl Street at right. (Image by S.O.M.E. Architects. Click to enlarge.)

Amid complaints that it’s too dense, a plan for 32 new apartments on Monmouth Street in Red Bank won zoning board approval Thursday night. 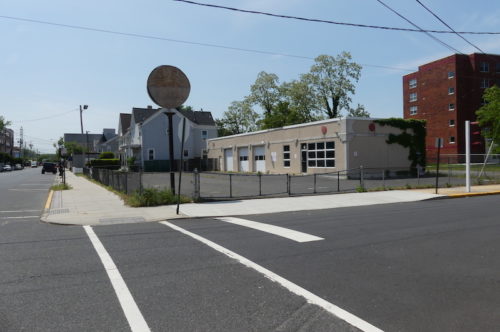 Recent and proposed views of the corner. One board member said he’s never known the site not to be “disgusting.” (Photo by John T. Ward. Click to enlarge.)

On the table was a four-story project proposed for the northwest corner of Monmouth and Pearl streets. The plan calls for commercial space along Monmouth Street, and onsite parking beneath the residential units, accessed via a gated portal on Pearl.

No one from the development firm Park Valley Development spoke during the nearly three-hour hearing, at which it was represented by former mayor Ed McKenna.

Since the initial, and only other, hearing on the matter in May, Park Valley had added a three-bedroom affordable unit, answering a concern raised by board members. That brought the total designated as affordable to five; the original proposal called for one unit to be provided offsite.

The building would top out at 50 feet in height, and press up against sidewalks with little or no setbacks.

The garage will be wired for a row of electrical vehicle chargers, McKenna said. The devices will be installed based on demand, he said.

The onetime Sinclair gas station has in recent years served as home to a skate shop and Crossfit gym, but is now vacant.

Board member Eileen Hogan said the proposal “is nice and all, but it’s too dense.

“I think it’s a beautiful project,” she said. “It’s just too big” and needs to be “scaled back,” she said.

McKenna repeatedly cited the Station Place apartments, also on Monmouth, and West Side Lofts, on West Front Street, as similarly dense projects that have little or no setbacks and are “hugely successful.”

Likewise, he said, the Count Basie Center for the Arts, just across the street, recently completed a $27 million expansion that included no setbacks.

The project was also suitable to the area because of its proximity to the borough train station, just a short walk away, McKenna said.

Burnham said she agreed with others that the site now looks “crappy, but you don’t have to develop 97 percent of the property.”

But board member Sean Murphy pushed back.

“I’m 57, and that property for as long as I can remember has been nothing but disgusting,” said Murphy. “Nobody’s going to build a house on it.

“We go off on the density,” he continued. “Take a good look at what’s there right now. It’s [also] taking the majority of the property. The only thing is, it looks like crap. And it’s looked that way for a long time.”

Board vice chairman Ray Mass noted that in 2009, the board approved a mixed-use building with ground-level stores and 12 apartments on two upper floors on the site. But the project went unbuilt.

Mary-Ellen Mess said an approval would create a rationale for future approval of high-density projects along the south side of Monmouth Street, which abuts homes along Oakland Street.

Carl DeAngelis, whose family has owned the property at the southwest corner of the intersection for about 60 years, called the Park Valley project “beautiful” and “a magnificent addition” that will further Monmouth Street’s emergence as the “connective tissue” between the downtown and the Shrewsbury Avenue business district.

“This project is not too

The vote was 6 to 1 in favor, with Hogan the sole no vote. Though she had reservations, board member and former council member Sharon Lee said the plan had checked off her two biggest concerns: onsite affordable housing and sufficient, self-contained parking.

Two board members, Bruce Maida and Chairwoman Lauren Nicosia, recused themselves from the hearing for unstated reasons.

• The board also approved a 1,328-square-foot, one-story addition to the Parker Family Health Center, at 211 Shrewsbury Avenue.

The new space will contain offices, consultation rooms and a multipurpose room.