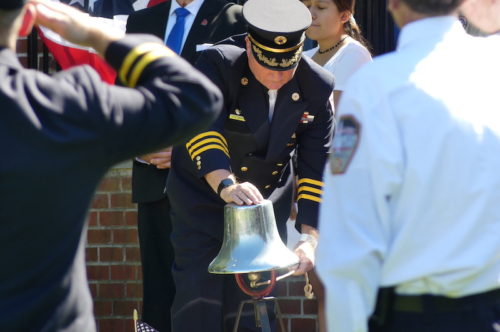 On a swath of Riverside Gardens Park lawn emblazoned with a temporary memorial, Red Bank residents and others gathered Saturday morning to remember the 2,996 lives taken on American soil on September 11, 2001. 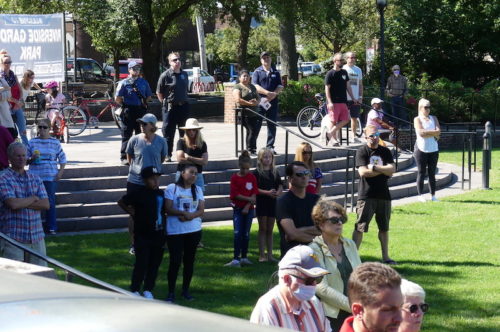 Attendees watching the ceremony from the park plaza. (Photos by John T. Ward. Click to enlarge.)

About 100 attendees watched and listened as borough police and volunteer firefighters stood in formation throughout the ceremony, held under bright blue skies.

Mayor Pasquale Menna, right, addressing the audience, reflected on the role of the park itself in the days and weeks after the attacks.

“Some of you may recall that in the plaza, for about four months after September 11, there was a mountain of flowers that kept on being replenished” by people who worked in town or stopped by for a meal, he said.

“Most of them didn’t know individually the people who passed away, but they wanted to be part of the comfort” offered to those who had lost loved ones, he said.

Now, he said. “all of us have an obligation to learn from the lessons of 9/11,” he said. One, he said is vigilance, in recognition that “we are not invincible.” Another, he said, is to remember those lost by providing solace to those who lost loved ones in the attack.

On the grass in the park’s center lawn lay a temporary image incorporating images of the twin towers and American flag, created by public works supervisor Bobby Holiday, who also serves as the volunteer fire department’s chief.