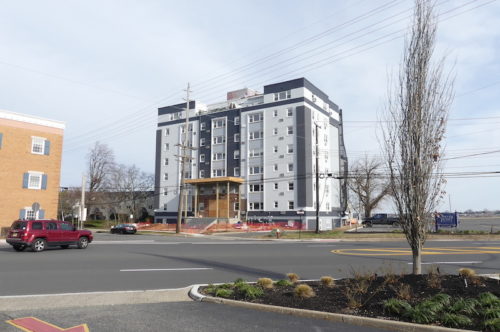 Restarting an effort that failed four years ago, the Red Bank council is expected to again press for the installation of a traffic light at a busy intersection.

Also on the agenda for the council’s semimonthly meeting Wednesday night is a request that Monmouth County create new crosswalks on busy Shrewsbury Avenue.

• A resolution asking the New Jersey Department of Transportation to install a traffic light at Bodman Place and Riverside Avenue.

The curved stretch of roadway between the Molly Pitcher Inn and Cooper’s Bridge is also known as Route 35, and is under the state’s jurisdiction.

In 2017, a similar push resulted in the DOT determining it was “not feasible” to have a traffic signal there.

The agency told redbankgreen at the time that it had “investigated this request numerous times over several decades and has communicated to elected officials on multiple occasions that adding a traffic signal at the intersection of Bodman Place and Route 35/Riverside Avenue is not feasible.”

Why? Because a signal at Bodman place “would be too close to the signal at the intersection of Riverside Avenue/Rector Place/Bridge Avenue. The spacing would increase the potential for same direction crashes and create coordination issues negatively affecting traffic on Route 35,” the DOT said at the time.

As a condition of the approval, Saxum was required to seek seek state approval for a traffic light there, though the housing project could go ahead without it. Saxum has not yet started construction.

• A resolution calling on the county to create “safe crosswalks” on Shrewsbury Avenue from Newman Springs Road to Monmouth Street.

Here’s the full agenda. The meeting is scheduled to be conducted via Zoom beginning at 6:30 p.m. Access and participation details can be found here.