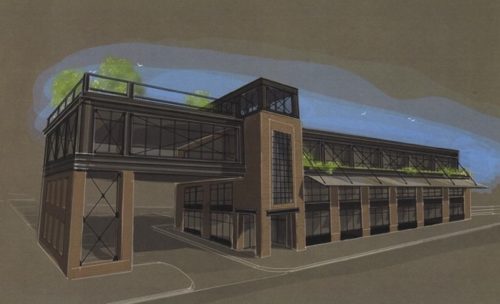 A rendering of the office building Downtown Investors wants to erect at 21 Linden Place. (Image by Stephen J. Gassert Design. Click to enlarge.)

A Red Bank developer hopes to expand its holdings by erecting a new office building downtown.

But first, Downtown Investors says it needs planning board approval to demolish a house estimated to be 132 years old in order to create parking. 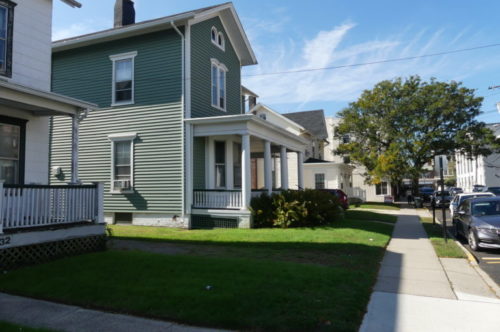 Marked for demolition in the plan is a house believed to have been built in 1889. (Photo by John T. Ward. Click to enlarge.)

The demolition plan for 26 Wallace Street drew flak late last year from the Historic Preservation Commission, which rejected the request in October.

At that point, Downtown Investors was proposing to replace the house with a 30-space surface-level parking lot, after it dropped plans for a drive-thru ATM there.

Removing the ATM, and the change-of-use variance it necessitated, made it a matter for the planning board, officials said.

Now, the firm is slated to go before the board Monday night with the plan for 30 spaces, which would abut a parking lot the firm owns at 21 Linden Place.

This time, the firm expects to show the board “step two” of its plan, which would follow if the parking proposal is approved, Downtown Investors principal Jay Herman told redbankgreen Tuesday.

Though the application up for review does not call for any construction, renderings of an office building the company hopes to build at 21 Linden will be used to show the board what’s envisioned for the site, Herman said.

Without approved parking, the firm can’t move ahead in its discussions with potential corporate tenants, he said.

The firm’s portfolio include red brick office buildings that flank Linden Place at Broad Street and serve as branch offices for tenants including Merrill Lynch and Morgan Stanley. The new building would also provide office space only, Herman said.

For 30-plus years, the firm has made a practice of securing parking in advance of marketing its space, Herman said. Without it, potential clients aren’t interested, he said.

The house, just steps from Broad Street, is believed to have been built in 1889. Herman told redbankgreen in October that it is in “an extreme state of disrepair” inside.

The hearing may serve as a test of sorts of the HPC’s muscle. Commission members argued in November that Downtown Investors would first need to appeal its denial before it could proceed with the application. Herman, however, disputed that assertion.

The agenda for the hearing mistakenly refers, twice, to the application as calling for a “parking garage.” No garage is planned, even if the office building is approved in the future, Herman said.