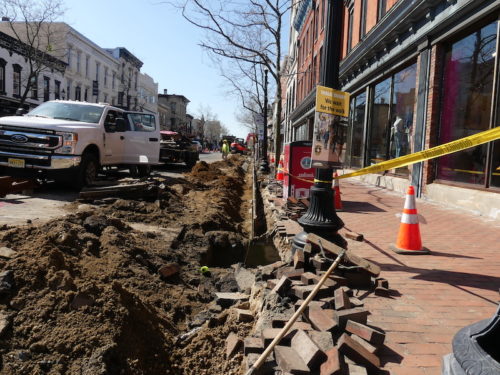 An ongoing split among Red Bank council Democrats played out as a power struggle Wednesday night over who will steer the reopening of the seasonal Broadwalk dining and shopping plaza. 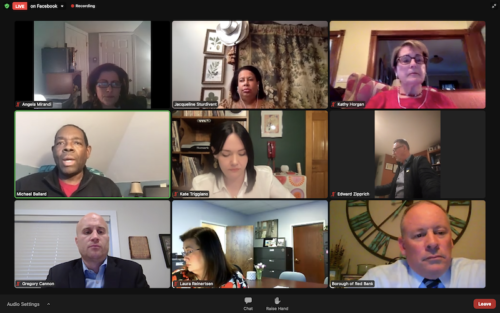 The third annual edition of the car-free zone in the northernmost blocks of Broad Street won’t begin until mid-July at the earliest, officials have said. That’s when a construction project to replace underground utilities and redo the streetscape, months behind schedule, is expected to be completed.

At its regular session Wednesday night, with lame duck Mayor Pasquale Menna absent for the second consecutive meeting, the council had been expected to take up a resolution to appoint council members Michael Ballard, Angela Mirandi and Ed Zipprich to an ad hoc committee to plan the relaunch.

But Council President Kate Triggiano reported that Menna had objected to the appointments, and because the mayor has statutory authority to name committee members, asked that the measure be tabled.

Ballard, who’s running to succeed Menna as mayor, and Zipprich pushed back, contending that Menna had been informed by email of the nominations by the majority faction and had responded “OK.”

“Well, the code states that this is a mayoral appointment,” said Triggiano, leading the Zoom session in Menna’s absence. “It states that the mayor forms committees. He stated very clearly not only to myself but also to the clerk that these are not the appointments he wishes to make.”

In an email read aloud by Triggiano, Menna said the appointments of Ballard, Mirandi and Zipprich had not been mentioned at the April 13 council workshop session. “I strongly believe it should include stakeholders and residents as in the past,” he wrote.

At the council’s April 13 meeting, Ballard called for a comprehensive plan for Broadwalk that addressed trash as well as traffic throughout town, parking, emergency access, impacts on businesses outside the zone and more.

“My vision, because I saw the way that the committees were put together, where specific businesses and specific people were selected, I envisioned a much broader coalition,” Ballard said. “Not just businesses, not just restaurants inside the Broadwalk, but other retail businesses… to get a full impact on what this does to our town.”

Zipprich said Menna had “waffled and changed his mind” about the committee appointments.

After nearly 20 minutes of debate, Ballard said he would agree to tabling the measure until the council next meets, on May 11, but added “once again, we’re dragging our feet.”

“Let’s move on,” said Councilwoman Kathy Horgan, who said earlier this month that she won’t seek a sixth term. “This is getting ridiculous.”