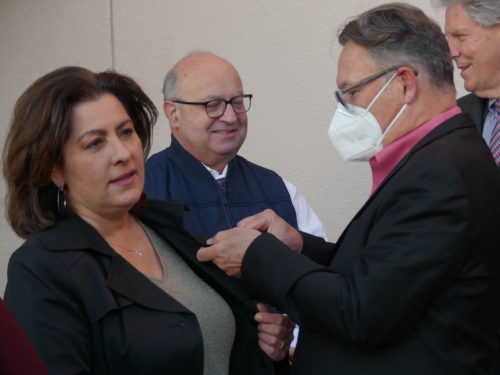 Councilman Ed Zipprich attaches a borough pin to the jacket of Angela Mirandi after her swearing-in ceremony February 11. (Photo by John T. Ward. Click to enlarge.)

A legal challenge to Angela Mirandi‘s appointment to the Red Bank council earlier this year has been dropped, redbankgreen has learned.

But while the lawsuit filed by Councilwoman Kathy Horgan and Democratic party secretary Kate Okeson failed to dislodge Mirandi, it shone a harsh light into the workings of the local party under Councilman Ed Zipprich, whose leadership faces an historic challenge next month.

Thaddeus Maciag, a lawyer for Horgan and Okeson, filed papers Thursday withdrawing the suit “with prejudice,” meaning it cannot be revived.

Mirandi, Zipprich, the local Democratic organization and the borough were the defendants.

In their February 22 complaint, Horgan and Okeson, members of the party’s 18-member “county committee,” alleged they were unlawfully excluded from the process of picking nominees to succeed Erik Yngstrom, who quit in January.

They argued that because of improprieties in the selection process, Mirandi should be removed, with the seat left vacant through the end of the year.

In filings, Zipprich did not dispute that he’d left the committee out of the process. Instead, he argued that “there was no statutory requirement that all members” of the committee participate in the vetting of candidates for the vacancy, as Bauman summarized it.

In his decision, Bauman said the law is not clear on whether a party’s selection must include the input of its committee, or even if non-members can participate.

In a press release following Bauman’s decision, Zipprich said the party “implemented a process that was transparent and permitted by the bylaws as it concerns the vetting and selection of replacement candidates.”

The organization also demanded that Horgan and Okeson “reimburse the Borough for costs incurred,” though Zipprich has not repeated that demand at any of the council’s meetings since then.

The Democratic party, which has dominated Red Bank government for more than three decades and has had full control since 2019, has ruptured into two factions over the last three years.

Now, in a situation not known to have any precedent in the borough, a slate of 18 candidates for the county committee is challenging a Zipprich-endorsed slate with the expressed aim of ousting him as party chairman.

The group, aligned with Horgan and Councilwoman Kate Triggiano, is “fed up” with what they called an “exclusionary party machine,” they said in an announcement in late March.

Democratic voters will choose the winners in the June 7 primary.

Menna was dumped by the party committee in early March after 16 years as mayor; he’d previously served 18 years as a council member.

Mirandi, whose term ends December 31, is seeking the nomination for a three-year term. She’s on an unopposed ticket with John Jackson, who is running for the seat Horgan has said she will give up after this, her fifth term.

In the Republican primary, Brian Irwin is running for mayor on an unopposed ticket with GOP Chairman Jonathan Maciel Penney and Christine Stout, who are seeking council seats.