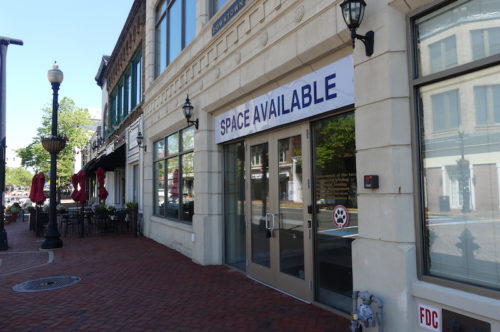 Downtown Red Bank may see the debut of those businesses and more in coming months, based on a flurry of approvals by the borough planning office in recent weeks. Read all about them in this edition of redbankgreen‘s Retail Churn. 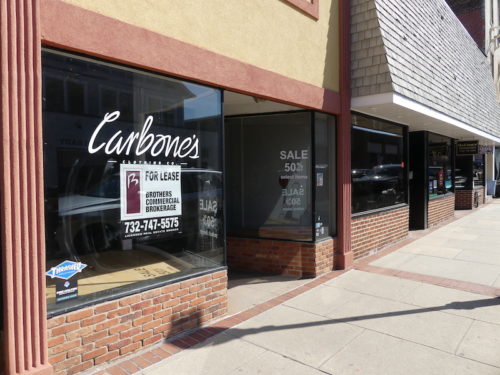 Coming soon to 24-28 Monmouth Street: a camera store with limited hours or a pet-treats shop. Below, a toy shop has an OK to open on East Front Street. (Photo by John T. Ward. Click to enlarge.) 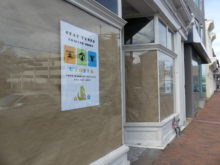 Downtown Investors owns the building, constructed in 1920 as the Whitfield Building. Over the years, its tenants have included an Acme supermarket and a Newberry’s five-and-dime.

• A “general store” is coming to 22 Monmouth Street.

Lisa Readie Mayer, whose father Jack Readie, owns the building, tells redbankgreen that the shop will have a “little bit of everything,” from candy bars to coffee to cleaning products.

“They’ll carry all kinds of snacks, beverages, milk, eggs, bread, canned goods, personal care items, paper towels, tissues, and other paper goods, and more,” Mayer said via email. “There is no place downtown to get these types of products, so it will be an ideal spot for run-outs for other businesses in town, and even for residents of all the new apartment buildings opening.”

An opening by early June is anticipated, she said.

The space was last occupied for about nine months by an interior design firm.

No further information was immediately available, and the application doesn’t specify which of the three storefronts at that address the shop will occupy; two are currently vacant.

Carbone’s, a clothing shop, had occupied 24 Monmouth since 2016. In a February post on Instagram, the business announced it was moving to a new location, but had not yet updated its address as of Friday morning.

In addition to toys for sale, the 2,100-square-foot space will offer candy, hot coffee, and prepackaged ice cream.

A portion of the application was not immediately approved, however. The Brachs want to host events “such as reading sessions, puppet shows, birthday parties and art classes,” according to the filing, and for that, they’ll need to apply for an assembly use, according to the response by planning director Shawna Ebanks.

• Kimberly Katz has approval to open a hair salon at 218 West Front Street, a small building next door to the Red Bank Antiques Center. Old-timers may recall it as the location of Itri’s Luncheonette.

Guy Johnson, who operates the antiques center, owns both properties.

Posted on May 6, 2022 at 7:56 am, filed under Business, Featured, Food and Drink, Government, Land Use & Zoning, Real Estate, RED BANK, Restaurants, Retail Churn, Retailing and tagged nj, red bank, RiverCenter, zoning. Bookmark the permalink. Follow any comments here with the RSS feed for this post. Trackbacks are closed, but you can post a comment. Email this story.
PREVIOUS: RED BANK: CRIME & ARREST REPORTS NEXT: RED BANK: MIRANDI CHALLENGE DROPPED