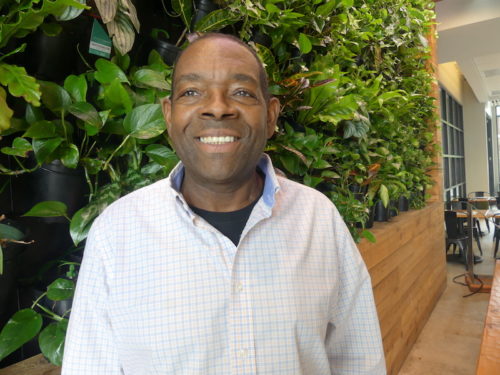 Michael Ballard at Sickles Market in Red Bank in May. (Photo by John T. Ward. Click to enlarge.) 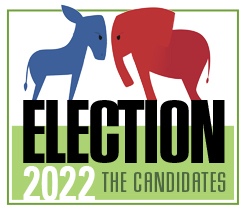 Unlike his opponent in the June 7 Red Bank Democratic primary, Michael Ballard says he’s in it for the long haul.

“I am running to be the mayor of Red Bank for the next four years,” Ballard told redbankgreen last month. And with his “team,” he vows to return the governing body “to a pre-2018 council that was not at each others throats.” Ballard heads to his seat on the council dais for the first time after being sworn into office in January, 2018. (Photo by John T. Ward. Click to enlarge.)

In the June 7 Democratic primary election, Ballard, now in his second term as a council member, faces political newcomer Billy Portman for the party’s nomination to succeed Pasquale Menna as mayor.

The winner would face Republican Brian Irwin in the November general election. Irwin and his running mates, council candidates Jonathan Maciel Penney and Christine Stout, are unopposed in the GOP primary.

Whereas Portman is running solo, Ballard has two running mates who he views as rounding out the “team” he and council ally and Democratic party chairman Ed Zipprich have assembled since they found themselves in the minority faction on the all-Democratic council.

Now joined on the dais by Jacqueline Sturdivant and Angela Mirandi (serving through December 31 as a vacancy appointee), they hope to secure a full, three-year term for Mirandi and add John Jackson, giving them solid control of the governing body, as well as the mayor’s seat. (The majority would also appoint Ballard’s successor on the council if he wins the mayoralty.)

Having a unified team that’s not thwarted by what he termed a “borough administrator on steroids” is key to ending the endless arguments and making progress on development and quality-of-life concerns, Ballard said.

Ballard, 59, grew up in Asbury Park and Neptune. He “bounced around Monmouth County” as an adult, residing in Long Branch, Eatontown and Shrewsbury before moving to Red Bank with his wife, Rose Sestito, in 2010. They live on East Bergen Place.

With bachelor’s degree in accounting and master’s in business administration, both from Monmouth University, Ballard said he has worked for the past year in Piscataway as a financial analyst for IEEE, a nonprofit professional organization.

He previously served on the borough board of education, where he was elected vice chairman, and has served on the board planning board. After losing a race for council in 2015, Ballard won a seat as paired on a ticket with incumbent Zipprich in 2017.

While Portman and others have criticized the intraparty process that led to Menna being dumped after 16 years as mayor, and 18 before that as councilman, Ballard defended both the decision to replace Menna and the manner in which it occurred.

He says the characterization of Menna as a loyal Democratic standard-bearer is “debatable.”

“I think the mayor has been a Democratic mayor for the most part,” Ballard said. But in recent years, as the council split into two factions, Menna “quite frankly landed on the wrong side of that divide with council people who were not in tune with the residents, who were pro-development and wanted to take a hands-off approach to governing. And I didn’t agree with that.”

Now, “I want to be mayor because sitting on the council for the last four years and a few months has given me a perspective that I didn’t anticipate coming on board,” Ballard said.

“I’ve heard from residents and a lot of residents are not happy with the direction the borough has been going in over the last three or four years,” he said. “And I equate that to leadership or lack thereof, and it comes from the top and I felt that it was time for a change. And I thought I could be that change.”

At the root of the council split, he said, is “development,” including repairs to the Senior Center, which was damaged by a fire suppression system leak more than three years ago.

“Had we fixed it in 2019, when we first became aware of the problem, that would’ve cost us around $500,000,” instead of the nearly $2 million approved by the council in February, Ballard claimed.

But it wasn’t fixed in part, because then-Business Administrator Ziad Shehady had “a plan behind the scenes… to develop the senior center,” and persuaded the council to reject two rounds of repair bids, Ballard maintains.

Central to his work on the council has been opposition to what he sees as a wrongheaded shift of power from the elected officials to the appointed borough administrator.

“They gave the administrator all the executive power that the council had. So that basically neutered the council,” he said. “I didn’t support that.”

The “team” has already begun fixing that, Ballard said, undoing a 2018 amendment that delegated greater executive say to the position, particular in hiring for non-leadership positions.

Ballard notes that he was a consistent opponent to the formation the now shuttered Redevelopment Agency, which he said has unnecessarily cost taxpayers $439,000.

Ballard said he is “not anti-development,” but “it should be sensible and controlled. We should be able to dictate what goes on in our town.”

Ballard opposes the direction of the Charter Study Commission, which appears set to recommend both a change in the town’s ‘borough’ form of government and a switch to nonpartisan elections.

Driving the move toward a new form of government in part is a widespread complaint that council people can, or do, interfere in the day-to-day operations of borough hall, a charge Ballard rejects as unfounded.

“I don’t believe there’s been one provable example” of interference, he said. “It’s not a practical concern for me given the information that is out in public.”

“We hire an administrator to oversee the day-to-day operation,” he said. The Ballard-Jackson and Mirandi team, he said, is “competent enough to know the lines and the pecking order of how you get things done. You go through the administrator. But that doesn’t prevent them from going directly to the directors and asking questions to get information.”

If elected, he said, his focus “is going to be, as it always has been since day one, taxes and finances,” with attention also to quality-of-life issues, from traffic to park maintenance to dog feces.

“A big issue I’m hearing is dog poop that is not being picked up,” he said. “I don’t know, how much you can do about that, short of having people follow people around who are walking their dogs, but these are issues that are important to me and important to the people who live here.”

Who can vote in the primary? Under New Jersey law, voters who are already affiliated with the Republican or Democratic Party can vote only in that party’s primary election. Unaffiliated voters may participate in the primary of their choice, but will automatically have their voter registration status changed from unaffiliated to either Republican or Democrat (whichever ballot has been chosen) unless and until they later change their registration status back to unaffiliated or to another political party.

Unaffiliated voters can vote at their polling locations by indicating the political party primary election in which they would like to vote.