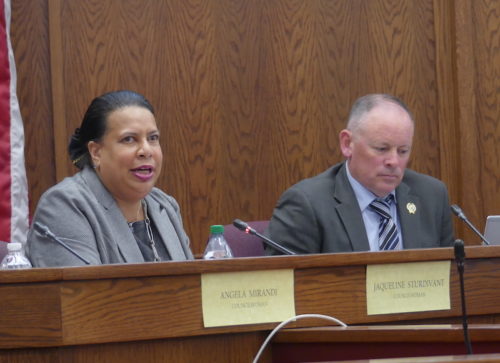 Hours before Billy Portman pulled off the biggest political upset in memory in the Red Bank Democratic primary Tuesday, another candidate slipped into the race for mayor.

Though elected to the council last November as a Democrat, and an avowed member of defeated mayoral candidate Michael Ballard‘s Democratic “team,” Councilwoman Jacqueline Sturdivant filed to run in the general election as an independent, she confirmed Wednesday.

The filing, first reported by Tap into Red Bank, was made on the last day that independent candidates could file petitions with the Monmouth County clerk to run in the November general election.

Sturdivant’s petition was not immediately available.

Prior to the council’s workshop and regular sessions Wednesday evening, Sturdivant acknowledged that she had filed to run as an independent. But she declined to immediately answer any other questions.

The move appeared to be a hedge against a possible loss by Ballard to political newcomer Portman, who ended up capturing 61 percent of the party vote to Ballard’s 39, with an unknown number of mail-in ballots yet to be tallied.

Portman, who attended the council session, said afterward that he welcomed the challenge from Sturdivant, but had no insight into what prompted it.

“My guess is maybe they were hedging their bets in case it was a close race,” Portman told redbankgreen. “But I can’t see has this reflects well on that faction of the Democratic party.

“I may be a neophyte, but it seems like a bad move politically,” he said.

Councilman and Democratic party Chairman Ed Zipprich told redbankgreen he had been aware of the petition but did not sign it.

“Jacqueline has a mind of her own,” he said.

Asked if the move was a hedge bet by the party, he said: “Democracy works that way, right? Everybody’s allowed to run in America, whether you’re a Democrat or Republican. I think everybody has an opportunity to throw their hat in the ring, the same way Mr. Portman did.”

And a proclaimed Democrat, and member of Ballard’s “team,” running as an independent? Zipprich said former council member Cindy Burnham and council candidate Sue Viscomi had both run as independents, “and they were members of the Republican party at the time. It’s no different.”

He declined to say if the local party, under his leadership, would support Sturdivant.

“I have complete confidence in Jacqueline’s abilities,” he said. “I think we’ll cross that bridge when we get to it.”

But Councilwoman Kate Triggiano said Sturdivant “can’t run as an independent unless she leaves the Democratic party.”

Contrary to Zipprich’s assertion, she said both Burnham and Viscomi were declared independents during their runs as independents.

“The Democratic party officially has a candidate, and the candidate is Billy Portman,” along with council candidates Angela Mirandi and John Jackson, Triggiano said.

Votes are still being tallied also for the so-called “county committee” that runs the local organization. But Triggiano, who led a reform slate, told redbankgreen the group has won 11 to 13 of the 18 seats in play, giving it enough heft to achieve its first goal: ousting Zipprich as chairman.

The slate “will take the majority decisively,” she said. “It’s sufficient to have a vote and change the leadership,” she said.

Here are the standings as of early Thursday: Red Bank County Committee results 060922

As to Portman’s trouncing of Ballard, Triggiano called it “a clear mandate.”

Zipprich told redbankgreen: “We worked hard, we ran a good, positive campaign. You win some, you lose some.”

Ballard declined comment Tuesday until all the votes are counted, and did not address the subject during the council meeting.

Following the meeting, four-term Mayor Pasquale Menna, who endorsed Portman after being dumped by the Zipprich-Ballard faction, embraced Portman in a tight hug outside the council chamber.

“You did it,” Menna told Portman.

Portman and Sturdivant would face Republican Brian Irwin in the November election.