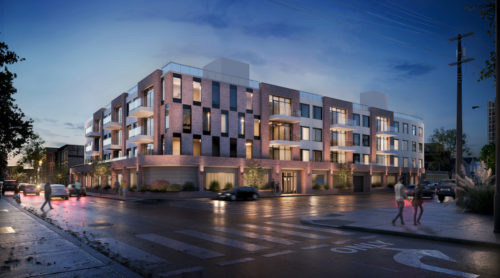 The project would replace a one-story commercial building at Mechanic Street and Globe Court. (Rendering by GRO Architects. Click to enlarge.)

The action followed design changes by developer Mazin ‘Patrick’ Kalian that eliminated one story, 10 dwelling units and the need for key variances. 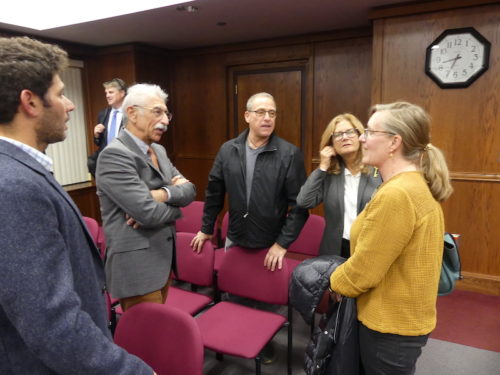 The project, called One Globe Court, would put a four-story building with ground-level parking on the northwest corner of Globe Court and Mechanic Street.

The site, now occupied by a one-story retail and office building, is directly across Mechanic from The Forum, a four-story, 24-unit apartment building Kalian completed in 2021.

Reducing the proposed building by a floor brought the total number of units down to 40, and obviated the need for a parking variance. With 50 units, the site would have required 88 parking spots under borough ordinance, a Kalian planner testified; under the revised plan, the site would provide 73 spots, one more than required.

The project still needed a height variance, for exceeding the 40-foot limit by six feet, and setback waivers.

Also changed was the treatment of eight spaces between pilings at ground level on the Mechanic Street side to screen the parking lot.

The original plan featured “vertical louvers, that I thought looked pretty slick,” architect Richard Garber, of GRO Architects, told the board. But after hearing complaints that they “looked like bars, a la a prison,” the design was changed to incorporate geometric-patterned grilles, Garber said.

The change was the sole modification requested by the Visual Improvement Committee of downtown promotion agency Red Bank RiverCenter, which expressed ‘”strong enthusiasm” for the overall plan in a letter.

Jennifer Glassberg, owner of the Nest home decor shop located in a former firehouse next door to the Forum, praised the plan, but voiced concerns about construction-related debris, which she said was not well-managed during that building’s construction.

During public comments, Wallace Street resident and former council member Cindy Burnham complained that residents “never get” adherence to zoning laws from the board.

“We know how developers work. They come with the big, big, big plans, everybody pooh-poohs them, then they come back and they’re down a floor,” she said. “They’re always going to be greedy and ask for more, but it’s you guys on the board that have to protect Red Bank and the residents and the homeowners that live in these areas that are being built up.”

She got some pushback from board member Rich Angowksi. “I feel like I’ve sat on many applications that have been denied at this board, because we’ve done our job,” he said.

Board member Sean Murphy, who had suggested reducing the size of the project at a meeting in August, praised the plan.

He agreed with a traffic consultant hired by Kalian who testified in August that the apartments would generate less traffic than the existing business tenants at the site.

Another board member, Anne Torre, endorsed the view of a Kalian planner, Andrew Janiw, who had testified that the project fulfilled the objectives of the borough’s 1995 Master Plan and all subsequent updates.

Kalian representatives testified that the project will feature 30 two-bedroom apartments and 10 one-bedrooms, with six units set aside for qualified low- and moderate-income tenants.

Project attorney Ed McKenna, a former mayor, told the board he will pursue a previously discussed request that the borough council eliminate a right-turn lane from Globe Court to Mechanic Street as unnecessary.

That will create new street parking for the public as well as a drop-off space for package deliveries, he said.