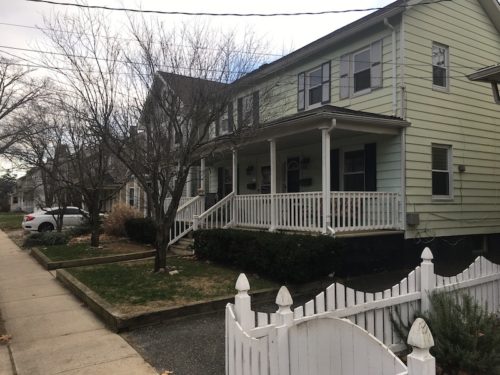 The owner of the house at 70-72 Wallace Street defended short-term rentals. (Photo by John T. Ward. Click to enlarge.)

Still, a number of residents made impassioned arguments pro and con at the borough council’s final meeting of 2022 Wednesday night, previewing what’s likely to come in 2023. 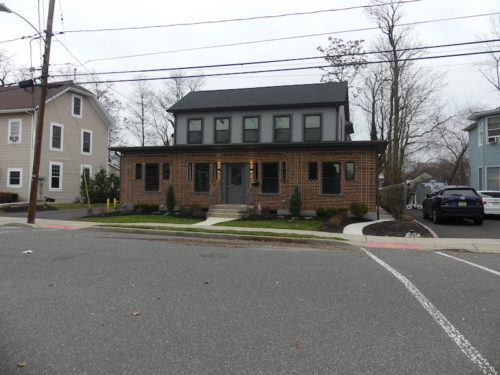 An Airbnb-listed house on Mechanic Street that a neighbor said has been the location of numerous disruptive ‘bashes’ in recent years. (Photo by John T. Ward. Click to enlarge.)

At issue was a proposed ordinance up for introduction that would set terms for short-term residential properties, or STRPs. The topic dominated the combined workshop and regular sessions, with commenters divided over whether, and how tightly, to impose new rules.

While several owners of Airbnbs argued the units are needed and economically beneficial without causing any adverse impact, one resident complained of “horrendous” parties at one, and a downtown worker said allowing more would make it even harder for working people to live in town.

“You can see that there’s a lot of contention here, and you absolutely have to have a workshop where all these ideas can come together,” said Denis O’Sullivan, of Wallace Street.

Though the ordinance has already been tabled twice before, it was evident from the outset of the session that it might be amended further. Mayor Pasquale Menna urged the council to be “very, very cautious” on the issue, or risk undermining “pristine residential communities.”

“Zoning ordinances remain on the books for a long time,” he said. “I am concerned that if we pass an ordinance that does not protect the integrity of our residential districts, we are ultimately going to be sowing the seeds of destruction of further deterioration of those residential districts.”

Councilman Michael Ballard, who has led the charge to impose borough control over short-term rentals, repeated several times, as he has at past meetings, that the code committee, which has been drafting the ordinance, wants to hear all viewpoints and suggestions.

Still, there won’t likely be “a complete ban” on the units, as in Eatontown, Ballard said. “We don’t want to do that,” he said.

In the end, “not everybody’s going to be happy,” he said, but “we want to be sure to get this as close as possible.”

During public comment, several property owners echoed remarks made by Councilwoman Kathy Horgan, who said the ordinance “feels too punitive” to homeowners who provide short-term rentals. She cited a provision that would limit rentals to 60 days per year.

“I think it’s important to our business for people to come from wherever,” Horgan said. “We want to continue to be a destination town. Having short-term rentals near transit is important.”

John Gosden, who offers short-term rentals in a second house on his Harrison Avenue property, said the Airbnb marketplace is “very transparent” in terms of location, fees and availability.

They’re “self-regulated,” he said. “The guest reviews the host, and the host reviews the guest, and it doesn’t get posted until after you both do the reviews. One bad review, and no one’s going to stay at your place.”

Megan Murphy, who did not give a home address, said she works in Red Bank but cannot afford to live in town because of rising housing costs, which short-term rentals exacerbate.

“People are being priced out of living in the towns they work in,” Murphy said. “Airbnbs are hollowing out rental markets, creating unaffordable housing situations and making it impossible for the people that serve communities to live in those communities.”

If it’s not ready to ban short-term rentals, she said, the council should “severely restrict them and make them an undesirable option for people to come in and buy up houses to rent out.”

But Anthony Scannell, who bought a two-family at 70-72 Wallace Street in 2021, said income from short-term rentals enables him to restore his “fixer-upper.”

“I didn’t have the intent to come here to run and a business,” he said. “I wanted to fix the house up. I wanted to add to the charm of the historic district I’m in. And I’m in the process of doing that. All of the proceeds that I’m getting from this particular short-term rental is going into the house.”

He said a “a lot of accusations” about STRPs are going about, “and all of them are unsubstantiated.”

But Andrea Fallon said the Airbnb-listed house two doors away from her home on Mechanic Street has been a “horrendous” problem for neighbors for the last two or three years, attracting numerous guests who throw loud parties.

Starting every Wednesday or Thursday, 12 to 20 cars show up with guests for “bashes” that have included bounce houses, stages, karaoke contests, and “screaming and yelling,” she said.

“It’s not my imagination,” Fallon said. “The police come, but as soon as they go away, it just starts up again.”

She said Airbnb took the address off the site for 30 days in response to her complaints. The single-family house, she said, has eight bedrooms, an assertion supported by a property card filed with Monmouth County records.

Carol Werner, a Bank Street resident who bought the house Fallon spoke about with her husband in 2019, told the council via its Zoom link that Fallon’s comments were “shocking” to her.

“Not one person from Red Bank has ever contacted us to tell us our property was so heinous,” she said. “No police officer, no town official. This is shocking to me that no one has approached us.”

“We really try to make sure that our guests are not partying,” she said. “We feel like we’ve addressed every problem that has been brought to us.”

[On Friday, police Chief Darren McConnell said police have responded to 13 noise complaints about the house since 2020. No summonses have been issued or arrests made, he said.]

O’Sullivan, of Wallace Street, called the proposed ordinance “a very contentious document, and a targeted attack on potential landlords.” As written, it would enable an objector to make two or more unsubstantiated complaints to the police, triggering a possible license revocation, he said.

His wife, Mary Beth Glaccum, said she felt the ordinance arose as a result of a “spiteful neighbor on my street.”

“There is no recourse” to address unfounded complaints leveled against STRP owners, she said. On the flip side, the rentals could provide economic benefits to the municipality and businesses, she said.

“The animosity toward this is unfounded,” she said.

The ordinance was tabled for the third time. Because the council was holding its last scheduled meeting of the year, a proposed introduction would have been futile, borough Attorney Dan Antonelli confirmed in response to an inquiry during the session. Under state statute, the law would have to be introduced anew, with attendant advertising, after the municipal government reorganizes in the new year, he said.

Ballard said a workshop session on the issue would be scheduled for early January.